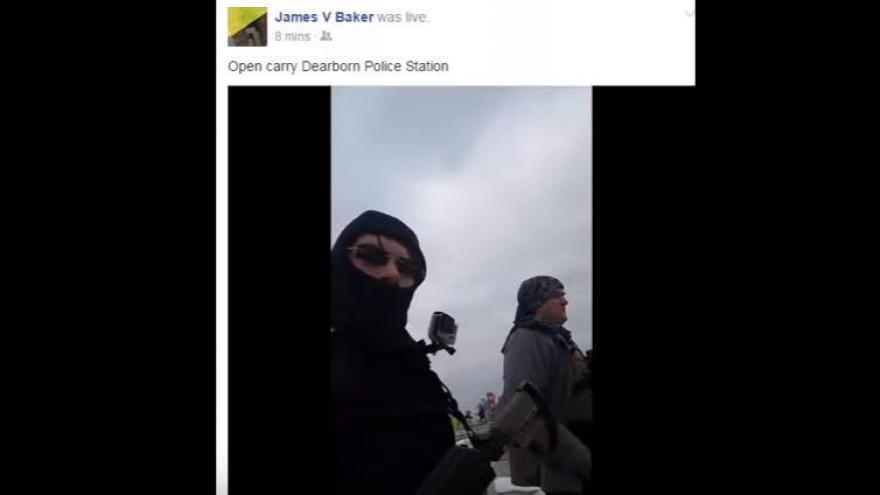 (ABC 57) Two heavily armed men entered the Dearborn Police station to file a complaint about being pulled over, according to a press release from police and the video posted by the men arrested.

On February 5, Dearborn Police responded to a shopping center to investigate reports of two men in a vehicle wearing tactical vests and masks.

When police arrived, the men had already left the area.

At a park approximately 3 miles away, a police sergeant located the vehicle.

When the sergeant approached the vehicle he noted the occupants were dressed in heavy tactical vests and the passenger was wearing a mask which covered his face, police said.

After doing a preliminary investigation, the sergeant did not see any firearms in the passenger compartment, so he released the subjects.

The men then went to the Dearborn Police station.

The 24-year-old male suspect entered the building wearing a tactical vest, mask, and armed with an AP-14 firearm and handgun.

The 40-year-old suspect entered the station wearing a tactical vest and was carrying a camera and tripod.

Officers at the station say the men initially refused to comply with officers' commands. They eventually complied and were taken into custody without incident, police said.

Dearborn Police Chief Ronald Haddad stated in the press release, “I find this behavior totally unacceptable and irresponsible. This is not a 2nd Amendment issue for me. We had members of the public in our lobby that fled in fear for their safety as these men entered our building. I want to express my appreciation for the many calls of support we’ve received from the community including a call from the president of Michigan Open Carry, Inc. who made it clear that he and his organization stand with law enforcement and unequivocally condemn the actions that took place in our lobby this past Sunday.”