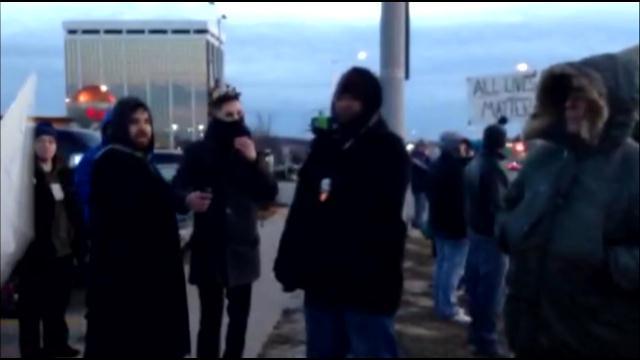 Counter protesters marched through a crowd of police supporters at a rally on Highway 100 near Mayfair Mall.

The protesters told CBS-58 they are not affiliated with the Coalition for Justice, a group behind the demonstrations demanding justice for Dontre Hamilton.  Some members of the small group said they attended the rally, simply to show that \"Black Lives Matter.\"

During the rally, police had to break up a heated exchange between the two groups.

\"I got threatened by one of your people here,\" said one protester who only wanted to be identified as \"Christopher.\"

Christopher says one male police supporter threatened him as protesters mixed in with the crowd.

Christopher says the threat he received from a police supporter-- contradicts their cause.

Deanna Alexander, a Milwaukee County Supervisor for District 18 was one of many police supporters who attended Thursday afternoon's rally.

\"It was really disappointing to see how they came out here and behaved tonight,\" said Alexander.

Many protesters accused Alexander of being racist after some controversial tweets she sent out during Dontre Hamilton protests in Milwaukee.

\"People in these groups are really the same people who've been sending me death threats, and really just being rude to anyone that's willing to stand up for law enforcement,\" said Alexander.

Apart from the brief exchange-- the rally remained peaceful as dozens expressed their support for police, including the officer who shot and killed Hamilton.

\"He did what he had to do to protect his life,\" said one demonstrator, a police veteran who did not want to be named.

Many signs said \"All Lives Matter,\" but Christopher says not all lives are getting the same respect.