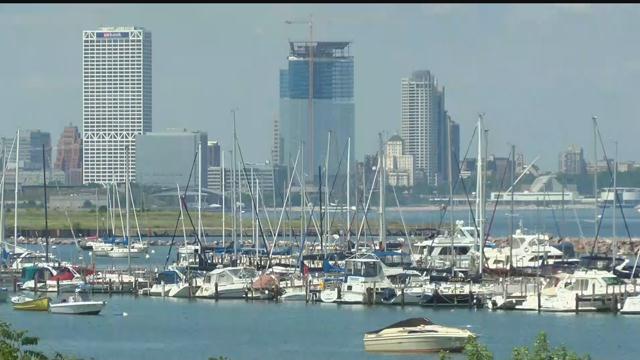 The health department partners with the University of Wisconsin-Milwaukee to test the water a couple of times a week… If the levels of bacteria are high, they close the beach or issue an advisory.

There are many factors that contribute to these levels are rain because it washes pollutants into the water, high temperatures because it fuels the growth of algae, trash and waste from animals (wild and domestic).

Paul Biedrzycki is the director of disease control and environmental health for the city of Milwaukee. He said that up to now, the beach season has gone remarkably well.

“At all of the beaches we are seeing at least 30 percent decrease in the number of advisories and closures so that’s really the good news,” Biedrzycki said. “But we’re not done with the season yet and there are many environmental influences, not only rainfall but temperature, for example, that really contributes to water quality issues. Rising water temperature really does fuel the growth of algae.”

Out of the three beaches, Southshore Beach is the one the department issues the most advisories or closures a year because of its location. It’s in a shallow area that makes it more likely to concentrate bacteria, Biedrzycki said.

If the beach is closed, people aren’t advised not to swim in the lake. Biedrzycki said people can help keep the bacteria levels low.

“This is something that the public can have a strong influence in terms of picking up after your pets, properly disposing of trash and litter and being very cognoscente of what they dump down the sewer particularly the storm sewer, gasoline, motor oil, anti-freeze dumped on a storm sewer makes it very quickly into our watershed,” Biedrzycki said.