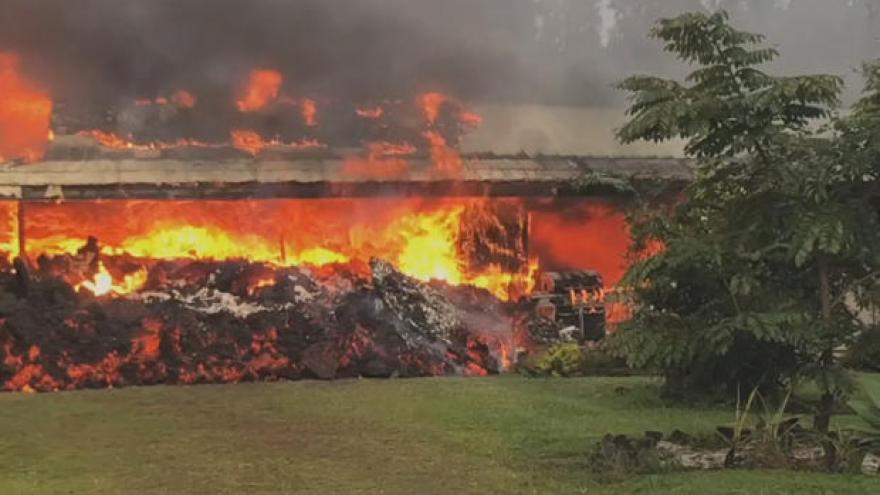 Hundreds of earthquakes have also rocked the area, and more volcanic cracks opened in the ground over the weekend. At least 31 homes and other structures have been destroyed.

About 1,700 people living nearby have been evacuated.

Authorities have locked down the Leilani Estates neighborhood in Pahoa, more than 25 miles from the Kilauea Volcano. No residents are going in right now.

Emergency management sent out a cellphone alert late last night, warning everyone who was still in the neighborhood to get out. But CBS News has learned there are still some people inside, and police say they're not going in to get them.

Correspondent Carter Evans got a view of the area flying overhead. From the air, lines of smoke show where lava is flowing through the Leilani Estates as homes continue to burn. 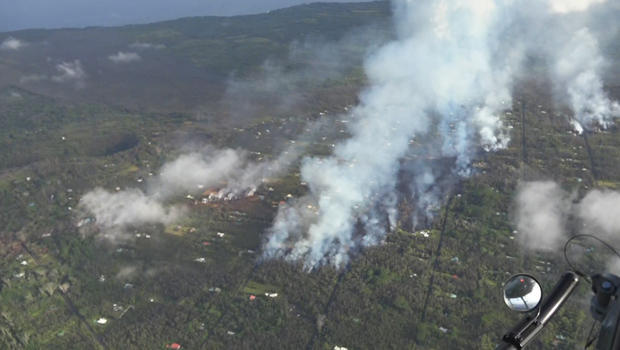 There are no firefighters down there, says Evans, because there's nothing they can do.

This is an unstoppable force.

The slow-moving lava has consumed everything in its path, including trees and homes. Even a car was no match for the molten wall. 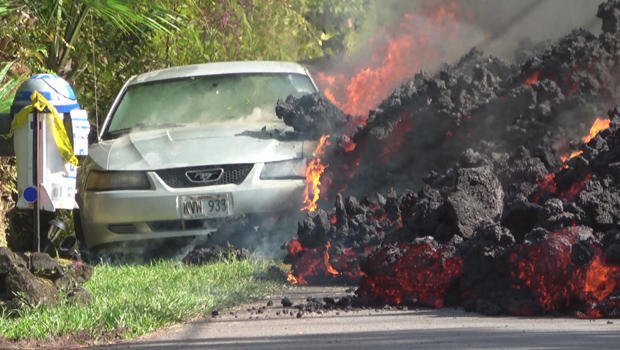 "The eruption progressed a few more extensive flows," said civil defense administrator Talmadge Magno. "It seems like there's a lot of magma underground, and there's no sign of [it] slowing down."

At least 10 fissures have opened up in Leilani Estates. In some cases the eruptions were so violent, lava spewed more than 200 feet in the air.

On Sunday some evacuees were allowed back home to grab essentials. A line of cars waiting to return stretched more than two miles long.

"We choose to live here, but at the same time, yeah, it's painful, no question," said evacuee Lori Wada.

Evans asked, "Do you have any idea when you'll be able to go home again?"

"We don't even know if our home's going to be there again," she replied.

At first glance, it may not look like the mass of lava covering the roadway is moving at all. It's cooled, and there's a crust on top, but if you look at the leading edge, it is slowly inching forward.

Over the weekend, the Big Island was rocked by hundreds of earthquakes, including one measuring magnitude 6.9 – Hawaii's largest in more than 40 years.

Sam Knox lives about a hundred yards away from one of the eruptions. "It's like a Goliath, like a roaring jet engine," he said.

When asked why he chose to stay, Knox replied, "Because this is where I live, right here. I had faith in the gods that my house is going to be OK."

The lava is showing no signs of slowing down – and that's just one of the concerns here. Another is the toxic smoke. The lava emits sulfur dioxide, which can be deadly. Authorities say levels of the gas in what they call the "hot zone" are extremely high.