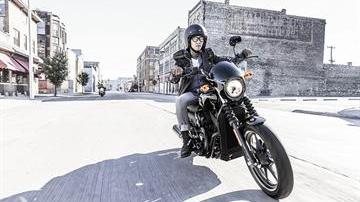 \"Times New Roman\",\"serif\"\">The company said that the Harley-Davidson Street™ 750 and Street™ 500 motorcycles – the first all-new platform from Harley-Davidson in 13 years – are built for urban environments with all-new liquid-cooled Revolution X™ powertrains, nimble agility and the sound and look that lets everyone know they are genuine Harley-Davidson.