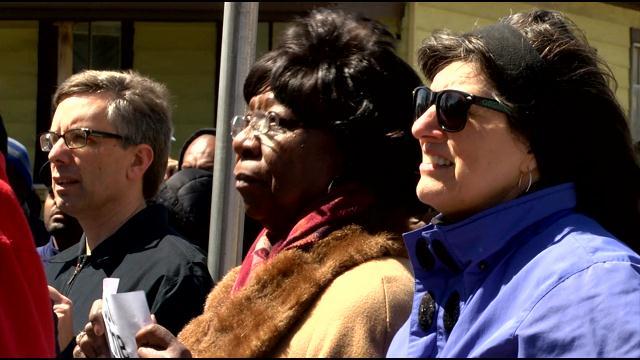 With several murders this week, residents in Milwaukee are fighting back against violence in their neighborhoods. More than one hundred people came out to rally in the Harambee neighborhood. It started out as a prayer vigil but quickly became a call to action.

People of all ages and races, churches and community groups came together to join hands, pray, and discuss what can be done about Milwaukee's violent start to the year.

\"It is time to take a stand. The police cannot do it themselves,\" said Tracey Dent.

Dent was one of many who spoke to the community saying neighbors have to look out for one another.

\"It's time for us to form block watches, to get to know our neighbors, to find out who is on our blocks. If we don't know them, ask them. Who are you? Why are you here?\" said Dent.

Keya Shempert agrees and with others has started a trending hashtag to encourage people to remember why violence doesn't work.

\"What we did was post picture of our kids and our neighborhood and we simply said #putthegunsdownmilwaukee,\" said Shempert.

She says this prayer vigil is just the first step in the right direction.

\"What I hope is this is a great relationship building exercise where people can know someone else, talk to their neighbor and we can solve things that way versus violence,\" said Shempert.

Milwaukee Mayor Tom Barrett says getting guns out of the neighborhoods will help too.

\"If someone commits a crime with a gun there has to be some certainty that they're going to face some prison time,\" said Barrett.

But Alder woman Coggs says that won't fix the problem.

\"Last week we heard an announcement about a billion dollars worth of development in the city of Milwaukee. what we didn't hear was any plans for any jobs for some of the most poverty stricken areas in this city which is where most of the violence is occurring,\" said Coggs.

She, and every person who spoke at the event agrees that community action will spur more change than legislation ever could.