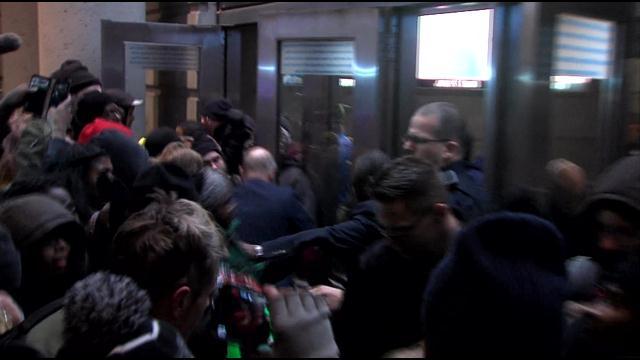 More than 100 protestors spilled into the streets of Milwaukee, protesting for a decision in the shooting death of Dontre Hamilton.

This rally comes just one day after the decision by a Ferguson, Missouri grand jury to not charge Officer Darren Wilson in the shooting death of Michael Brown.

Maria says what makes this significant for her family is that she wants federal prosecutors to take over her son's case.

From the federal courthouse, demonstrators marched to Grand Avenue Mall, where demonstrators called for a Black Friday boycott to protest against a city and community whom they believe does not support young, Black men killed by police officers.

As demonstrators stormed through Downtown Milwaukee, many bystanders stepped outside local businesses to snap pictures and chant in solidarity with them.

When demonstrators arrived at BMO Harris Bradley Center, some were determined to gain entry to the Milwaukee Bucks game.  A struggle quickly escalated between these demonstrators and security officers at the door.

\"This evening, the Milwaukee Police Department again successfully policed demonstrations in the Downtown area.  As we have in the past, we protected life, first amendment rights, and property.  The Hamilton family again reiterated their desire for peaceful demonstrations and expressions of frustration, and the MPD again demonstrated restraint in its facilitation of the demonstration.  No arrests were made.

Because a few people were intent on ignoring the family's request for an orderly protest, a Milwaukee Police sergeant and officer were injured protecting the BMO Harris Bradley Center from protesters attempting to unlawfully enter the building.  The members have not sought medical attention at this time.  This investigation is ongoing and we are actively seeking the assailants.  Anyone with information is asked to call Milwaukee Police.\"

Organizers re-scheduled this rally yesterday after bad weather conditions kept them from protesting immediately following the ruling in Ferguson.

Hamilton supporters hung signs on the park's Christmas tree to remind the public of the shooting that took place at the site.

The Coalition For Justice says they are using the Michael Brown case as an example to determine what they need to do next-- to get justice for Dontre.