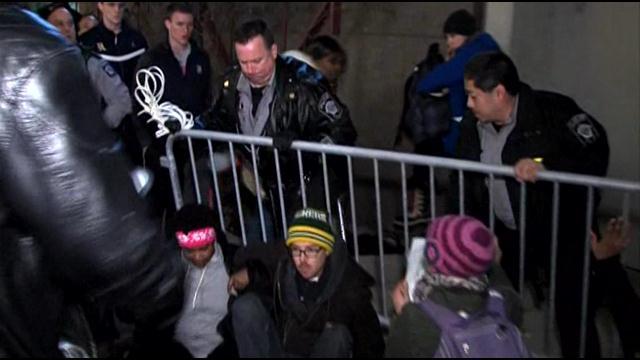 Another peaceful round of demonstrations in Milwaukee Tuesday night, but also a tense standoff with police at the Bradley Center, where demonstrators formed a human chain and tried to block people from getting into the Milwaukee Bucks game.

\"We're doing a little agitating,\" said Nate Hamilton, brother of Dontre Hamilton, who was shot and killed by a Milwaukee police officer April 30.

Supporters of Dontre Hamilton have been demonstrating for months, calling for criminal charges against Milwaukee Police Officer Christopher Manney. Those protests have intensified after Monday's announcement that no charges would be filed against Manney.

More than 100 people gathered at Red Arrow Park tonight, where Dontre Hamilton was killed.  After walking through the streets of downtown, the demonstrators went into action at the Bradley Center.

Demonstrators succeeded in blocking two arena gates for a short time, but Milwaukee Police responded quickly and in large numbers of officers. An unidentified officer on scene told demonstrators \"If you do not let people through, you will be arrested.\"

On their Twitter page, MPD said they made no arrests during the demonstration.

After returning to Red Arrow Park, Nate Hamilton said the Bradley Center demonstration took 4 or 5 days to plan. \"The truth of the matter is, we want people to understand that there's a problem going on in Milwaukee and across the nation, and it has to stop. We can't be comfortable (any) more with the system the way it is,\" Hamilton said.