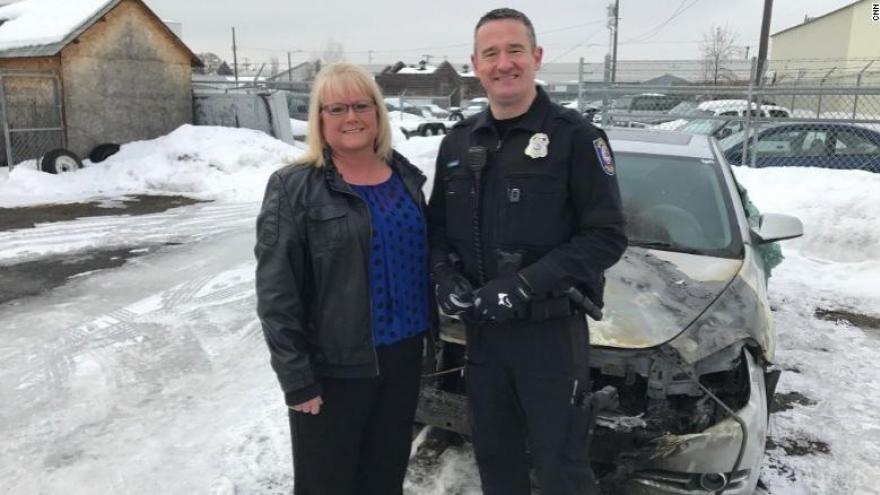 Spokane, Washington (CNN) — Imagine you're driving down a deserted residential street in the middle of the night when your car suddenly loses all power and rolls to a stop.

Smoke starts rising from under the hood.

You pull the door handle, but it won't budge. The car's doors are stuck in the locked position.

You kick at the windows, but they won't break.

You're trapped with no one around to help.

Then it gets worse: Smoke from the engine turns to flames.

"The car just went black," Novak said. "The radio shut off, all the lights went off. The motor stopped. I mean just black."

She grabbed for her phone and dialed a 911 dispatcher, who told her to try again to kick out the car's windows. They wouldn't shatter.

In his patrol car, not far away, Spokane police Officer Tim Schwering, was working his usual graveyard shift. "I just heard it on the radio and decided, I'm going to that," he recalled.

Minutes later, Schwering was there. He recalled finding Novak in her car in the middle of the street. The engine compartment was "completely engulfed in flames."

Schwering had to punch through the car's glass. But how?

But it "wasn't working fast enough," he said. "That's when I started ripping the glass out with my hands."

He worked for about a minute, all the while the fire threatening to hit the fuel line and spark an explosion.

Finally, Schwering created just enough space for Novak to climb through the window.

"I grab an arm, a neighbor grabs an arm, and we pull her out of the car and drag her to the ambulance, " Schwering remembered.

The video shows the three of them rushing away from the flames.

No one was injured, but Novak and Schwering were treated for smoke inhalation as a precaution.

The cause of the car failure and fire remains under investigation, Novak said. Immediately before losing power, Novak had driven over an ice bump -- those patches of frozen slush that dot Spokane's residential streets in winter. Her mid-sized sedan was only about four years old with just about 73,000 miles, Novak said, adding that it had been regularly serviced.

The bodycam video of the rescue has drawn widespread attention. As it turns out, Schwering is a big reason Spokane police officers wear them.

Before he became a cop, Schwering worked for the department as a director of strategic initiatives. One of his tasks was to implement police body cameras.

Impressed with the officers and their noble work, Schwering enrolled in the police academy. He took a pay cut when he joined the force a year ago at age 42.

As for the fame he's drawn since rescuing Novak, Schwering said, "Getting this attention is nice, but I can tell you a hundred stories that have happened in the past month within this department and around the nation that are doing the same things."

Novak said she was "at the mercy of whoever was going to come save me." She called Schwering her "guardian angel." She's sharing her story to promote Schwering's bravery.

"Divine intervention, by the grace of God -- whatever you want to say -- he came to my rescue," she said. "Because I wouldn't have made it. I honestly believe I would have perished in there."