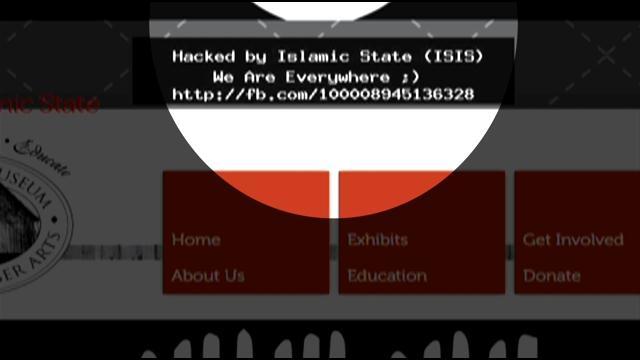 Small businesses across the country are slowly finding that their websites have been hacked and the terrorist group ISIS is taking responsibility. Everything from Goodwills to gas stations have reported their website being taken over by a screen that reads \"hacked by the Islamic state...We are everywhere.\"

It's a message that appeared on the Wisconsin Quilt and Fiber Arts Museum's website Monday morning. The message is now gone.

\"Everything is secure, just take a deep breath, everything is fine,\" said Museum's Executive Director Melissa Wraalstad. \"We contacted the company that host our website and they were very professional and took care of it right away.\"

John Fischer is a lead developer for Mindspike Design, the company who helps the museum run their website.

\"I don't have any respect for ISIS. When I saw that they put that up there, right away, I thought to myself I think ISIS has bigger fish to fry than the Wisconsin Quilt Museum website,\" said Fischer.

He says no information has been comprised.

\"This is more of a graffiti attack than it is a bank robbery. This is like someone spray painting the wall of the bank and not actually getting into the vault,\" said Fischer.

He also doesn't believe it's ISIS, \"Just one lone wolf individual that is operating maybe out of their dorm room, or their parents basement.\"

The person responsible could be hard to track down.

\"It could be hard if they are savvy enough to cover their tracks,\" said Fischer.

Neither the museum or the web site developers contacted authorities, they say because no information was stolen and it's all been taken down.

The FBI said there is internet crime complaint center that handles these sort of situations.