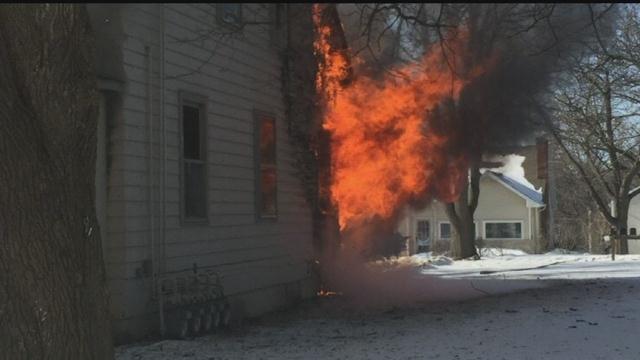 A mother was forced to throw down her daughter while trapped on top of a burning home.

On Wednesday night, the 9-1-1 call from the mother was released.

"Baby stay with me," the mother is heard saying as the dispatcher presses for details. "My house is on fire, me and my mom and my baby are stuck on the roof."

At this point, the smoke was so heavy neither of the women could breathe.

Between coughs the mother tries to calm the child who is heard crying.

The first officers who responded knew there wasn't much time and had to coax the mother to drop the baby to a waiting officer's arms down below.

"I told her mom you have to put your hands out like this and drop your daughter down. That's our only option right now," recalled Officer William Walser of the Lake Geneva Police Department. "She didn't like that at first. But, I said you have to do it now. She finally did it, had a nice drop. I caught her."

Right after that the mother fell off the roof and was caught by an officer.

The grandmother refused to jump.

A neighbor brought over a ladder and that's when the roof collapsed.

The Assistant Chief broke the fall.

He had minor injuries, but should be okay.

Some incredible heroics all the way around.