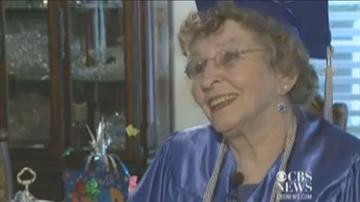 TURLOCK, Calif.(CBS NEWS) -- Alice Walner admits it took a lot of hard work, but on Wednesday night she did something she's waited 62 years to do, walk in a cap and gown and get her high school diploma, CBS Sacramento station KOVR-TV reports.

Walner didn't do that in 1952 with her graduating class, but she finally did it with her family watching proudly, including her husband of almost 50 years, their five children and many more.

Almost two years ago, Warlen set out to earn her high school diploma.

The principal of Turlock Adult High remembers the day he met her.

\"I immediately found out she was 79, and I was intrigued and impressed, and the first question that came to my mind was why,\" Isaias Rumayor Jr. said.

\"I've always wanted my diploma, and course I quit school, got married, raised kids and worked and now it's time to settle down,\" Warlen said.

She left high school at 16 to get married. After six busy decades of raising kids and working as a secretary, a barber, business owner and volunteer, among many other things, she said she finally found some free time in her 70s and decided it was time to finish what she started so many decades ago.

\"She got up early in the morning, and late at night she wouldn't give it up,\" her husband, Sherman Walner, said.

Of course, things are much different than they were in 1952. Alice had to take her classes online.

\"Alice would call whenever she got into a little jam with technology,\" Rumayor said.

Sixty-seven point five credits later - she hated biology - she was finally at graduation.

She said it's a lesson that it's never too late to go after a dream.

Walner has absolutely no regrets leaving high school at 16 years old. Now that she has her high school diploma she said she's done waking up early in the morning and she's going to enjoy being home and spending time with her husband.

Walner said part of the inspiration for going back to school was watching her husband and son get their diplomas through the military recently.