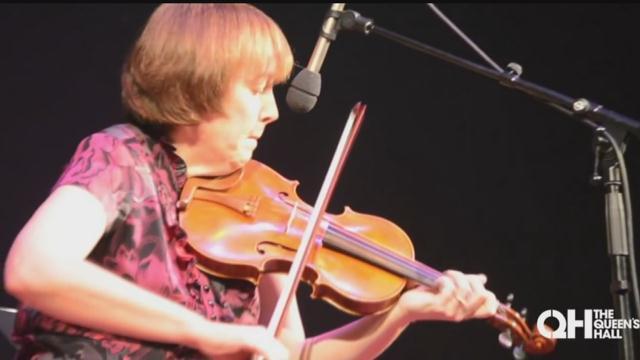 A special command performance by famed fiddler Liz Carroll is this Saturday at the Irish Cultural and Heritage Center near 21st and Wisconsin.

The Grammy nominated musician and composer is known around the world. Although American born, she has captured the coveted All Ireland title in competition in Ireland.

Accompanying Liz on the “bouzar” (bass bouzouki/guitar hybrid) is Pat Broaders of the group Bohola. Accordion virtuoso Jimmy Keane is a special guest and will help Liz celebrate the 40th anniversary of their duet win at the 1975 All-Ireland Championship.

Since astounding the Celtic music world when she won the Senior All-Ireland Championship at age 18, Liz and her fiddle have continued to amaze audiences around the globe. In 2011, she was awarded the Cumadóir TG4, becoming the first American-born composer to receive this major traditional music prize.

She has toured with many of the top Irish performers including guitarist John Doyle. In 2010, the duo received a Grammy nomination for their album Double Play. The previous year Carroll played for a fellow Chicagoan, President Obama, during the annual St. Patrick’s Day luncheon at the Capitol in Washington, D.C.

Liz began composing music as a young child and in 2010 released 185 of her compositions in a book titled Collections. Her newest album, On the Offbeat, was called “one of the best albums of the decade” by Irish Music Magazine.

“(Liz) is one of today’s most celebrated torchbearers of traditional Irish music…her fiddle music bears confidence, precision, no modest level of speed when the occasion calls for it and, above all, a bountiful sense of Celtic abandon.” – Fiddler Magazine.

ICHC Board Member Pete Fleming was a special live guest on the CBS 58 News at 4:30 p.m. Wednesday.

His interview with CBS 58's Michele McCormack is attached to this story.