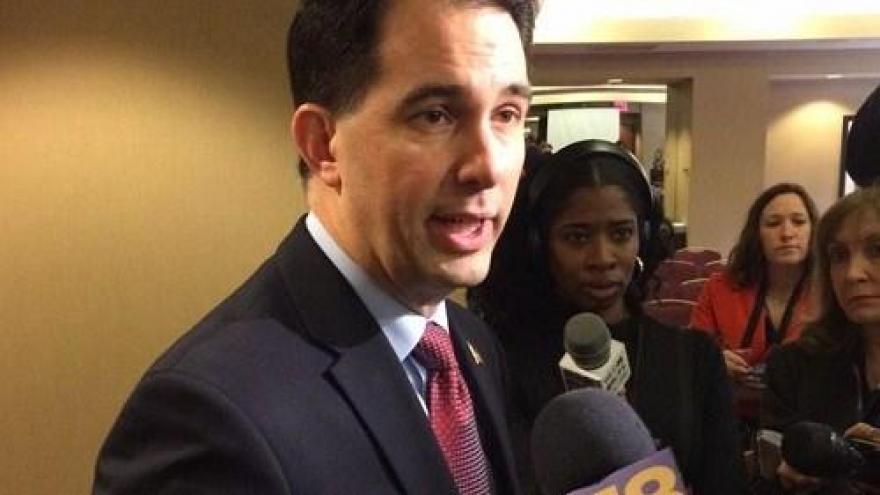 MADISON, Wis. (AP) — Wisconsin Gov. Scott Walker said Wednesday that he won't remove Milwaukee County Sheriff David Clarke from office over the death of an inmate who was denied water for seven days.

Walker said while he has the authority to remove Clarke, he doesn't feel it's his job. He acknowledged that reports about the 2016 dehydration death were concerning, but said it's up to voters to decide Clarke's fate and judge his oversight of the jail.

\"I'm not in a position to say,\" he said, adding that historical practice has been to defer to voters.

Voces de la Frontera, an immigrant rights group, petitioned Walker Wednesday to use a law that gives him authority to remove negligent county officials from office. Executive Director Christine Neumann-Ortiz said at a news conference that the group doesn't expect Walker to heed their call to fire Clarke but wants to remind the governor of his authority.

\"We want to highlight that he does have the power and, based on the statutes, Clarke has given him a basis to remove him from public office,\" she said.

Clarke has said little publicly about the inmate's death. When asked for his reaction to the petition, he initially declined to comment but later issued a statement through spokeswoman Fran McLaughlin in which he attacked Voces de la Frontera as a \"pro-criminal illegal immigration movement.\"

\"They couldn't beat at the ballot box so they are resorting to asking the governor to undo an election that was will of the people. This is what scummy people and organizations do,\" the statement said.

Walker said the only time he remembers a governor considering removing a county official from office was when former Gov. Jim Doyle sought the removal of Calumet County District Attorney Kenneth Kratz, who sent sexually explicit texts to a domestic violence victim whose case he was prosecuting in 2010. Kratz resigned.

\"The only time it was considered, ultimately that individual pulled out and it was because of sexting, so it was a much different situation,\" Walker said.

Walker, a Republican, and Clarke are also aligned politically. While Clarke ran in Milwaukee County as a Democrat, he has risen to fame as a brash, right-wing pundit and is a vocal supporter of Republican President Donald Trump. Some conservatives are trying to recruit Clarke to run for U.S. Senate next year against Democratic incumbent Sen. Tammy Baldwin.

More details about the death of 38-year-old Terrill Thomas have come in recent days as Milwaukee County prosecutors hold a weeklong inquest to decide whether to press criminal charges. Thomas died in April 2016 after guards shut off his water because he was acting erratically.

Walker says he doesn't make decisions based on news stories and wants to look at a \"scientific report\" about the death.

\"I've read some of the stories,\" he said. \"I don't make decisions based on what I see in the stories. I want to look at a scientific report and I haven't analyzed that yet.\"

Thomas' autopsy, which was released in September, concluded he died of profound dehydration with bipolar disorder as a contributing factor. His death was one of four deaths in the Milwaukee County jail within six months.

Democratic state lawmakers have also called on Walker to remove Clarke, and Wisconsin Democratic Party spokesman Brandon Weathersby issued a statement saying Walker is \"shamefully turning his back on Milwaukee County by refusing to take action against a sheriff who can't even keep his own jail safe.\"