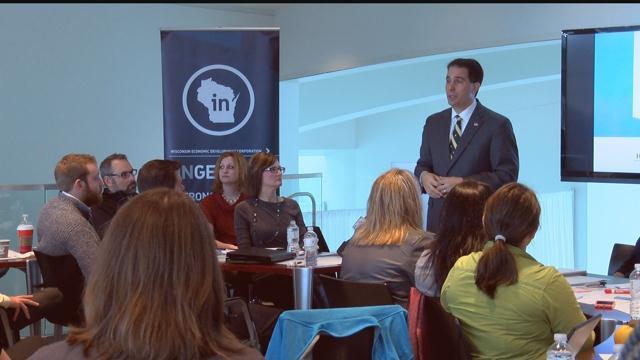 Despite recent news that S.C. Johnson and Kraft Heinz were laying off workers, the unemployment rate in Wisconsin is at its lowest in 14 years.  It’s at 4.3 percent, according to Wisconsin Department of Workforce Development.

Governor Scott Walker responded to the massive layoff announcements after the YP Summit at the Milwaukee Art Museum.

S.C. Johnson announced its moving 175 positions from Racine to Chicago within the next year or two. Kraft Heinz stated it will close seven plants in the U.S. and Canada including one in Madison.

"In the end my number one concern is the workers and their families and it's been a little frustrating in the last day to look at people in Madison trying to point the finger," Walker said. "One way or the other I think the people who are affected by this decision want us to work together and we're committed to doing that."

Walker said he plans to work with others to place workers who lost their jobs in similar positions. He also said he wants to meet with Kraft-Heinz CEO to see if anything can be done.

"That's unfortunate, we're going to do what we can to help whether it's actively trying to find ways to keep all or a portion of those jobs in Madison or if nothing else at least we're going to be actively engaged in helping those individuals if Kraft Heinz doesn't change its decision."

Kraft Heinz released the following statement, “We did not reach out, or engage in conversations with, officials in Wisconsin prior to the announcement, as the decision to close Madison was based entirely on the need to reduce operational redundancies and eliminate excess capacity within our North American network."

They went on to state, "Our Beaver Dam and Wassau factories are important to our North American supply chain and remain fully operational. The Madison facility will not close until sometime in 2017. We made this announcement now to give employees the time to make decisions that are right for them and their families. We are now working with Wisconsin officials to find a buyer that could potentially keep the Madison site open.  This process is just beginning – we will keep our employees informed as it progresses.”

The Wisconsin Department of Workforce Development has a data base with close to 86,000 job openings in the state. Click here to visit that website.