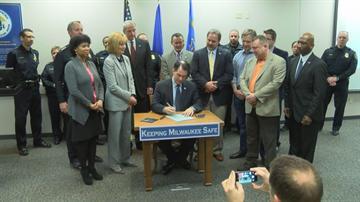 MILWAUKEE -- Governor Scott Walker signed Assembly Bill 693 into law Friday morning at District 3 Police Headquarters.  It provides $175,000 from the state to help Milwaukee pay for Shot Spotter.  That technology places sensors across three square miles of the city.  The sensors help police find out where gunshots are being fired and respond to crime scenes within a matter of moments.

Assembly Democrats tried to get the state to kick in closer to $225,000, but that was rejected mainly on a party-line vote.  This funding matches the money Milwaukee County Executive Chris Abele agreed to contribute in his budget, along with the money the City of Milwaukee is will pay.

The city plans to use this funding to expand the program to 10 square miles in the next year, moving its sensors into south side neighborhoods.

\"That is a huge benefit, not only as a deterrent to criminals, but particularly a huge benefit to those individuals, to those families and individuals and others living in the City of Milwaukee, who now, and as this expands, will have even more tools to protect,\" Walker said.

Police Chief Ed Flynn touted the program's importance, noting its data and information have helped police seize 500 illegal firearms in 2014.  But Flynn and the governor both added expanding shot spotter doesn't solve every problem, with Flynn pointing to seven shootings since Monday.

\"Obviously [Thursday] again highlighted the fact that we've got Wisconsin residents here in Milwaukee that are held hostage to violence and the legislature, I think, can help that process,\" Flynn said.

The governor and Milwaukee leaders talked about changing gun laws before they stood before cameras.  Chief Flynn wants the state to make illegally carrying a firearm a felony.  Right now, it's only a misdemeanor.

The governor said he would be willing to work with lawmakers on that, but added it will take some time.