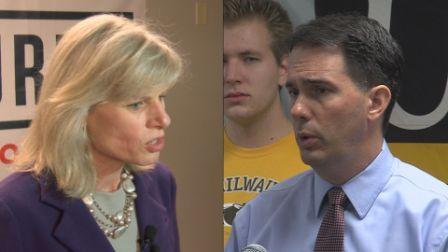 As voters head to the polls on Election Day, the big race facing them on the ballot is for governor. Democratic challenger Mary Burke looks to unseat incumbent Republican Governor Scott Walker.

Burke cast her ballot two weeks ago during the early voting period. Tuesday, it was Governor Walker's turn.

CBS 58 caught up with the Governor at his polling place Wauwatosa Tuesday morning. He was joined by his wife and two sons as they waited in line to cast their ballots at Jefferson Elementary School.

It was a busy polling location. Voters lined up before the polls opened at 7 a.m. and quickly filled up all of the voting booths.

Holding a green ballot that has his name on it, the Governor stepped into the booth, voted and put it in the ballot counting machine.

It's the battle of turnout on the campaign trail now. So, Governor Walker said his team will focus on aggressive canvassing in the final hours to get people to the polls and finish strong.

\"Our concern obviously last Wednesday was when the Marquette poll came out, at least among registered voters, it showed the numbers that it did, we were a little concerned that people might ease up a bit,\" he said. \"So we've been energizing the last few days on the stump, out on the bus tour, trying to energize our supporters to run hard and run through the tape.\"

Governor Walker said he is cautiously optimistic his team will be celebrating a victory once all the ballots are counted. He plans to make visits to Green Bay and Wausau, before coming back to State Fair Park in West Allis for his watch party.

Burke is also making Election Day stops in Green Bay and Wausau in her sprint toward the finish line. After that, she will rally voters in Glendale in the afternoon.

At an event in Stevens Point Monday, Burke said it looks like the turnout will be strong.

\"It is Wisconsin's future and there's a lot at stake here,\" she said. \"So we want to make sure that people understand their voice needs to be heard, and the way they can make that happen is get out and vote.\"

Burke will be in Madison for her watch party as the results come in Tuesday night.

Count on CBS 58 throughout the day for your complete Election 2014 coverage.