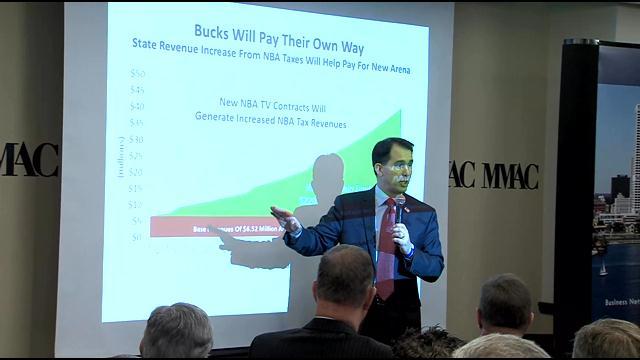 Governor Scott Walker announced his new \"Pay Their Way\" plan to help the Milwaukee Bucks fund a new arena. The plan the governor announced is aimed at keeping the NBA team in Milwaukee.

In the proposed \"Pay Their Way\" plan, the State of Wisconsin would issue a $220 million bond to the Milwaukee Bucks. Governor Walker says his plan would not use the estimated $6 million in tax revenue the state is already getting from the Bucks to pay for the bond. The governor says increased revenue from Bucks players, players on other NBA teams, increased TV revenue will pay for the $220 million bond issued by the State of Wisconsin.

During his announcement the governor said if the owners of the Milwaukee Bucks decide to sell the team before the bond is repaid, the new owners must pay the bond off before receiving any profits from the NBA team.

Here's a breakdown of the proposed \"Pay Their Way\" plan from the Governor:

• The $220 million would only be released after all other funding for the arena has been secured ($300 million).

• The growth in income tax revenue due to future contracts and estimated pay increases would be used to pay back the bonds. No existing base revenues collected from the Bucks or visiting teams would be used. This protects the state taxpayers and keeps an economic development tool and job-creating engine in Wisconsin.

• The district would be governed by a nine-member board appointed by the Governor and confirmed by the Senate. Members would serve staggered, 7-year terms. Members shall be residents of the state and have executive and managerial experience. No member may hold elective office or be a candidate for office.

• If Milwaukee County provides funding for the arena, the county executive shall appoint a board member subject to confirmation by the county board.

• If the city provides funding for the arena, the mayor of Milwaukee shall appoint a board member subject to confirmation by the city council.

• The district may not issue bonds, levy, or impose a tax.

• The district can raise revenue through the operation of the arena and will assume any outstanding Bradley Center Authority debt.

“We thank Gov. Walker for his leadership and commitment to building a transformative, multi-purpose arena that will help revitalize Milwaukee,” said Bucks President Peter Feigin. “The governor's support brings Wisconsin closer to creating a new state-of-the-art venue and entertainment destination that will become an economic catalyst for the entire state. We look forward to working closely with Gov. Walker, the state legislature, local officials and the entire community to make this vision a reality.”