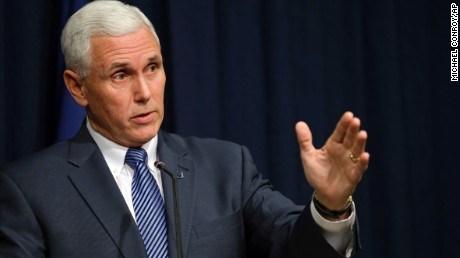 WASHINGTON (CNN) -- Indiana Gov. Mike Pence says concerns that his state's new \"religious freedom\" law will allow businesses to turn away LGBT customers is the result of a \"tremendous amount of misinformation and misunderstanding.\"

But he refused Sunday to answer at least six yes-or-no questions about whether the measure legalizes discrimination against gays and lesbians.

And he said he won't support legislation that would clean up the public relations mess by adding protections based on sexual orientation to Indiana's anti-discrimination laws.

\"That's not on my agenda, and that's not been an objective of the people of the state of Indiana. And it doesn't have anything to do with this law,\" Pence said in an appearance on ABC's \"This Week.\"

Pence's decision last week to sign into law a \"religious freedom\" measure that allows Indiana businesses to cite their religious freedom as a legal defense has triggered an intense backlash against his state.

White House Press Secretary Josh Earnest blasted Pence during the same segment on ABC's \"This Week,\" saying that the Indiana Republican \"is in damage control mode this morning, and he's got damage to fix.\"

\"It should be easy for leaders in this country to stand up and say that it is wrong to discriminate against people just because of who they love,\" Earnest said.

Tech companies have also taken aim at Indiana. Apple chief executive Tim Cook tweeted that \"Apple is open for everyone. We are deeply disappointed in Indiana's new law.\"

Salesforce.com head Marc Benioff said his company would stop its travel to Indiana and help its employees move out of the state.

The NCAA, which is headquartered in Indianapolis and set to host its men's basketball Final Four in the city this week, said the law could lead it to move events elsewhere in future years. The NBA, WNBA and NFL issued critical statements. And groups like the gamer convention GenCon and the Disciples of Christ, which holds a meeting in Indianapolis each year, have said they could move their events, too.

Even popular culture figures have weighed in. Miley Cyrus called Pence an \"a--hole\" on Instagram, while M.C. Hammer tweeted that Indiana's law is \"barbaric and inhumane.\"

Pence told ABC's George Stephanopoulos that it was \"absolute not\" a mistake to sign the law -- and noted that President Bill Clinton signed a similar one nationally, and then-state Sen. Barack Obama supported one in Illinois.

\"I'm just determined to clarify this: This is about protecting the religious liberty of people of faith and families of faith,\" Pence said.

Stephanopoulos noted that Illinois also had a state law barring discrimination based on sexual orientation -- which Indiana does not have.

He asked Pence about the comments made by Eric Miller, the head of Advance America and a powerful lobbyist on socially conservative causes in Indiana who was in Pence's office for the private bill signing ceremony last week.

The Indianapolis Star reported that one of the bill's chief legislative sponsors, state Sen. Scott Schneider, agreed that the law would protect those businesses.

Stephanopoulos asked Pence at least four times whether Miller's claims were accurate -- and each time, Pence deflected, refusing to grant the host's request for a \"yes or no\" answer.

\"People are trying to make it about one particular issue, and now you're doing that as well,\" Pence said.

\"Here, Indiana steps forward to protect the constitutional rights and privileges of freedom of religion for people of faith and families of faith for people in our state and this avalanche of intolerance has been poured upon the people of our state,\" he said.

In addition to the national outrage, local businesses have said they're canceling plans to grow there.

The chief executive of Angie's List -- who was also the campaign manager for Pence's Republican predecessor, former Gov. Mitch Daniels -- said his company is halting its plans for a major expansion in Indianapolis.

Pence said he's open to legislative efforts to clarify the \"religious freedom\" law -- though the state's Republican-dominated legislature already rejected Democrats' push to amend it to protect gays and lesbians from discrimination, and Pence said he doesn't support a new state law with those protections.

\"This isn't about disputes between individuals, it's about government overreach,\" Pence said, \"and I'm proud that Indiana stepped forward.\"