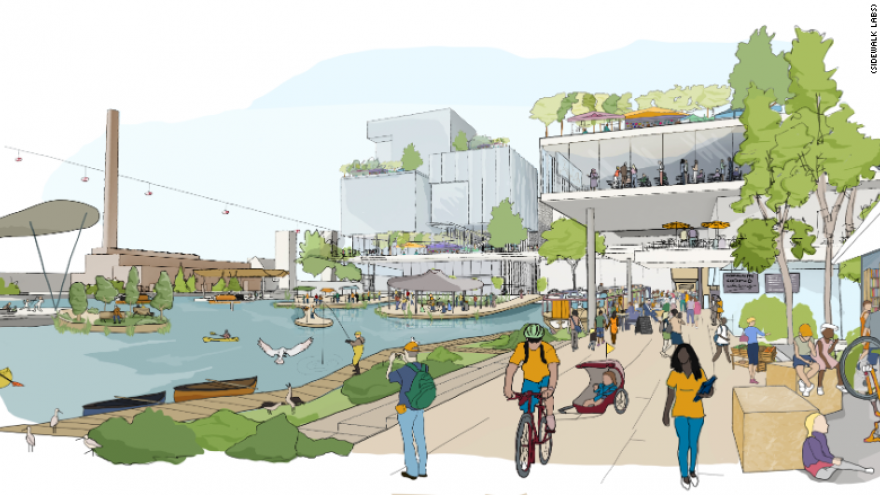 (CNN Money) -- Google, a company that's built everything from a search engine to a self-driving car, will now try its hand at a city neighborhood.

Sidewalk Labs, an urban innovation company owned by Google's parent company Alphabet, is teaming with Toronto to begin planning a neighborhood designed as a model for urban life in the 21st century.

Sidewalk Labs will invest $50 million in an initial phase of planning and pilot testing. Alphabet has also pledged to relocate Google's headquarters in Canada to the new neighborhood, called Quayside, which is on the Toronto waterfront. Google has roughly 1,000 employees in Canada.

Sidewalk Labs plans to do everything from reduce pollution, commute times and landfill waste to improve the weather. It envisions reducing the impact of wind, increasing shade on sunny days and blocking rain due to smart building design and tree planting.

In an ambitious proposal, Sidewalk Labs promised to make the weather more comfortable to enjoy the waterfront. It also believes it can reduce greenhouse gas emissions by 73%, potable water consumption by 65% and landfill waste generation by 90%.

Transportation would be prioritized around walking, cycling and shared electric vehicles. There would be more flexibility in zoning to allow for a blend of land use for residential, commercial and other uses.

"This is not some random activity from our perspective," Alphabet chairman Eric Schmidt said at a news conference Tuesday. "This is the culmination of 10 years of thinking about how technology can improve the quality of people's lives."

Sidewalk Labs describes the neighborhood as being built not from the ground up, but from the "internet up." There will be high-speed communication networks, as well as long-range, low-bandwidth connectivity. The latter is critical for placing sensors in public spaces and buildings to report environmental data such as carbon monoxide, noise, vibration and temperature.

Leaders from Google and the Canadian government said Tuesday that they hope the model will scale to additional land ripe for redevelopment along Toronto's waterfront, and all over the world.