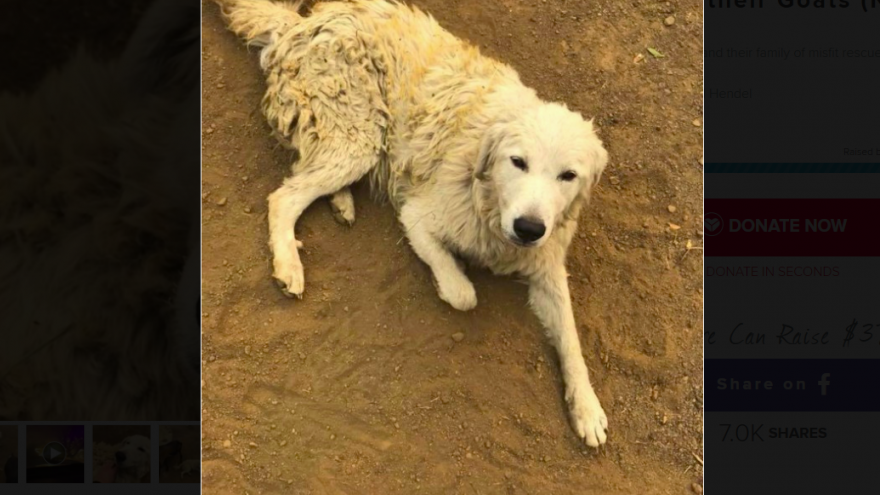 SANTA ROSA (CBS SF) — With the deadly flames of the Tubbs Fire bearing down on his property, Roland Tembo Hendel knew it was time to round up his family, dogs and cats flee.

But there simply was no room for the family’s flock of goats.

“By 11:10 we could see the first of the flames across the valley,” he wrote on his Facebook page. “By 11:15 they were growing larger and the winds went mad. We had loaded up the dogs and cats, but Odin, our stubborn and fearless Great Pyrenees would not leave the goats.”

Odin — living up to the Norse god he is named after — would not abandon the flock.

So the family reluctantly and with heavy hearts watched Odin as they were departing, hoping they would see him again but knowing it was likely he would not survive.

“Even under the best of circumstances it is nearly impossible to separate Odin from the goats after nightfall when he takes over the close watch from his sister Tessa,” Hendel wrote. “I made a decision to leave him, and I doubt I could have made him come with us if I tried.”

The escape proved harrowing as the fire erupted along Mark West Springs Road. The journey through the flames would prove deadly for one of Hendel’s neighbors — Lynne Powell — but his family finally reached safety.

“Cars behind us on Mark West Springs Road were pouring flames out of the windows as they roared down the road,” he wrote on Facebook. “Later that morning when we had outrun the fires I cried, sure that I had sentenced Odie to death, along with our precious family of bottle-raised goats.”

After the fire subsided enough for the Hendel family to return to their burned-out home, they braced for the worst.

“We were able to make it back to the smoldering wasteland of our forest,” Hendel wrote on Facebook. “Every structure is in ruins. Trees are still burning.”

But suddenly, the goats appeared and raced toward the family. And there was Odin — fur burned, whiskers melted, limping on his right leg. The battle injuries suffered in his desperate fight with the flames.

During the firestorm, Odin not only protected his flock, he also seems to have adopted several baby deer who were huddled around him for safety.

“Odin has lived up to his namesake,” Hendel wrote. “Pray for him and his charges. He is our inspiration. If he can be so fearless in this maelstrom, surely so can we.”

Like many evacuees, Odin, Tessa, and their goats were spending Sunday in an evacuation center — the Sonoma County Fairgrounds.

The family set up a funding site to help pay for Odin’s medical care — https://www.youcaring.com/odintessaandtheirfamilyofmisfitrescuegoats-978792