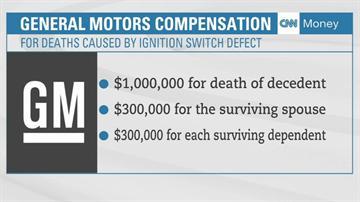 DETROIT -- General Motors is taking steps to compensate the victims of accidents caused by the company's faulty ignition switches. GM is offering at least one million dollars Monday to the families of those who died, and each surviving spouse and dependent is entitled to at least another $300,000.

People injured in crashes caused by the ignition switch will also be compensated. The amount depends on the severity of injuries.

GM will also count back seat deaths and deaths from side impact crashes. In the past GM has not counted those in its official tally of 13 deaths caused by the faulty switch.

To receive compensation, claimants must prove the ignition switch was the \"proximate cause of death\", and air bags must not have deployed for victims to be found eligible.