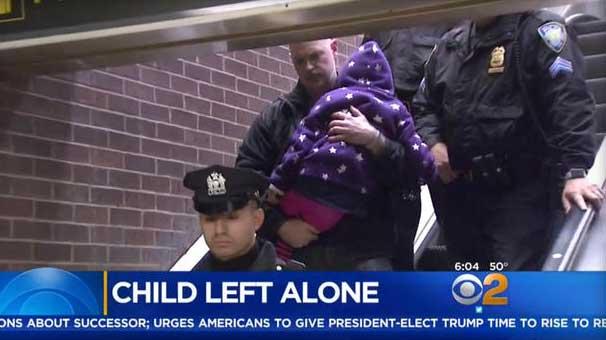 She gave an officer her address, a home in Stamford, Conn. – about 40 miles northeast – and police who responded there found the girl’s 30-year-old mother dead, Stamford police told the station.

Police haven’t released a cause of death, but they are investigating the case as a homicide. Sources told the station there were signs of a struggle at the home.

Stamford police Capt. Richie Conklin told the station the young girl appeared “very articulate” and was able to give officials the address though the family had only just moved there a day prior from New Jersey.

“To have lost a mother like that, it’s a very big tragedy for her,” Tom Barcello of the Stamford Police Department told the station.

The girl is in state custody and police are searching for a relative who may be able to care for her. The station reported the ex-boyfriend of the girl’s mother, a Guatemalan national, was questioned by police, but is cooperating and has not been charged.

Police are now searching for the girl’s father, identified as 32-year-old Elmer Gomez Ruono. NJ.com reports the child’s mother is his estranged wife and police are considering him a person of interest in her death. Anyone with information about Ruono’s whereabouts is asked to call Stamford police.