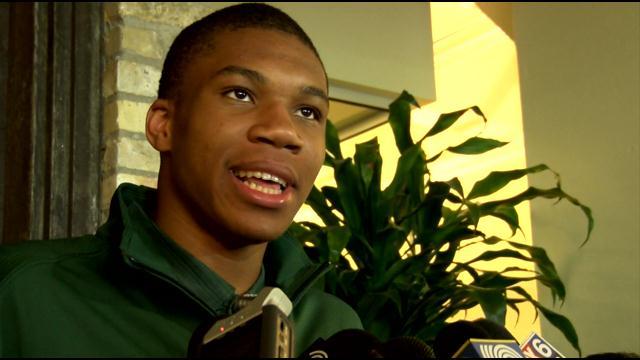 The National Basketball Association announced Monday that Bucks forward Giannis Antetokounmpo has been named Eastern Conference Player of the Week for games played November 28 to December 4. The award is the second of Antetokounmpo’s career and the first for a Buck since Antetokounmpo won the award in February of 2015.

Antetokounmpo averaged 24.3 points, 10.0 rebounds, 6.3 assists, 3.7 steals and 3.0 blocks per game during the week while leading the Bucks to a perfect 3-0 record. Against Cleveland on Nov. 29, Antetokounmpo tied his career high with 34 points and added 12 rebounds, five assists, five steals and two blocks. He joined Anthony Davis as the only players in the NBA this season to record at least 30 points, 10 rebounds, five assists and five steals in a game. Antetokounmpo also joined LeBron James as the only two players age 21 or younger to have 30/10/5/5 in a game since 1983. In a win over Brooklyn on Dec. 1, Antetokounmpo came close to his second triple-double of the season with 23 points, eight rebounds and eight assists, despite not playing in the fourth quarter. He followed that game up with his seventh double-double of the season, scoring 16 points with 10 rebounds in addition to a career-high-tying five blocks in a Bucks win at home against the Nets on Dec. 3.

In honor of Antetokounmpo’s 22nd birthday on Tuesday and being named Eastern Conference Player of the Week, Bucks fans can celebrate by getting tickets in select locations to two games against the Bucks biggest opponents (12/15 vs. Chicago and 12/20 vs. Cleveland) for just $22. The 2 for $22 package can be purchased online at www.Bucks.com/Giannis.