Get Ready to Stamp Out Hunger Saturday 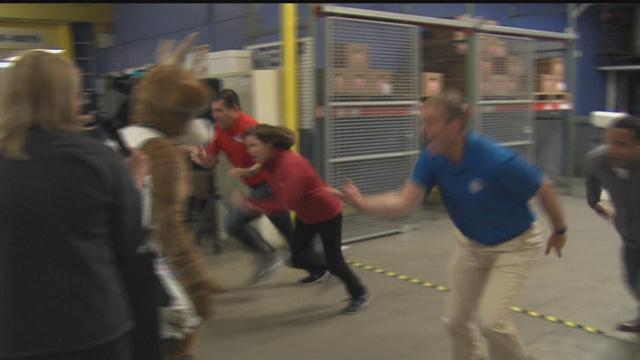 To get the letter carriers pumped up and to remind the public, the annual Letter Carrier Olympics were held at Hunger Task Force's Warehouse.

CBS 58's Michele McCormack participated and was proud to bring attention to this worthy cause.

The bad luck of Friday the 13th may have had an impact on Michele's team, but don't leave hunger to chance.

This is the largest one day food drive for Hunger Task Force which asks you to think about healthy children's snacks like granola bars, breakfast cereals or 100% fruit juice.

"In just eight hours we will fill this warehouse and the one at the airport," Sherrie Tussler of Hunger Task Force told CBS 58 News. "We'll see between half a million and 800 thousand pounds of food. One can at a time."

Maria Diggs-Jones of  U.S. Postal Service was on the winning team this year.

She's collected food as a letter carrier and donated as a citizen. She was on hand for Friday's challenge representing the Milwaukee Post Master.

"We're hoping to get tons of donations!"  A big smile came to her face and it wasn't just because she had a gold medal around her neck. "It's to feed the hungry in our community and nationwide."