Germanwings plane crash: Weather to impede search for 150 victims in the French Alps 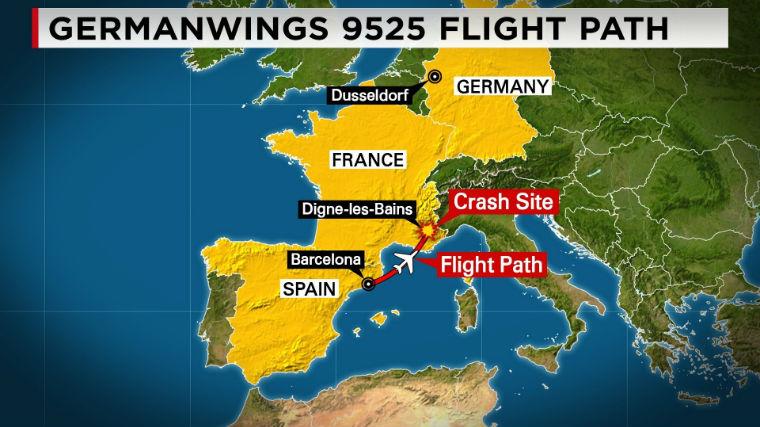 • 10:15 a.m.: The Marseille prosecutor says investigators have started the process of identifying victims' bodies but that their efforts will take time to complete.

• 7:50 a.m.: Two Americans were among those on board the doomed Germanwings flight, the airline's CEO says.

• 7:20 a.m.: French Interior Minister Bernard Cazeneuve tells French media: \"We cannot completely rule out terrorism, but it is not considered the most likely explanation at the moment. We need to let the investigation do its work.\"

• 7:04 a.m.: Ulrich Wessel, the head teacher at a German school that lost 16 students and two teachers on the Germanwings flight, says the crash has left him \"almost speechless\" and that the loss is \"inconceivable.\"

For a second day, rescuers will fan out over harsh terrain in a remote corner of the French Alps looking for the remains of 150 people.

So far, no one has been able to retrieve any bodies from Germanwings Flight 9525. And conditions for recovery efforts Wednesday are even worse.

Snow is forecast to fall in the area where plane went down a day earlier. Even without the inclement weather, crews face an array of challenges in finding the 150 people on board: Near vertical mountain slopes. Tiny pieces of debris. Human remains strewn for hundreds of meters.

\"Difficult conditions\" hampered the progress of police overnight, French Interior Ministry spokesman Pierre-Henry Brandet told BFMTV. They must secure the site before investigators can be brought in by helicopter to get to work.

Perhaps the only task as challenging as recovering the bodies is figuring out why the plane went down.

Germanwings employees held a moment of silence in Cologne, Germany, on Wednesday morning to mark the moment the plane came down. A \"small\" number of flights were canceled due to reluctance among some crew members to fly, the airline said in a statement.

Strange factors in the crash

The crash of Germanwings Flight 9525 is bizarre for several reasons: There was no distress call. The aircraft crashed midflight, rather than at takeoff or landing like with most crashes. And the plane dropped from an altitude of 38,000 feet for eight minutes, the airline said.

Searchers have so far retrieved the cockpit voice recorder, one of the plane's two \"black boxes,\" the French interior minister said. The device, which is designed to capture all sounds on a plane's flight deck, is damaged but not beyond use, he said.

Aviation expert Geoffrey Thomas, editor-in-chief of AirlineRatings.com, told CNN that the damage \"shouldn't be too much of a problem. Normally if they are damaged, we still get a lot of very valuable data from them, and in most cases, the data is still intact.\"

The cockpit voice recorder is particularly important, he said, \"because we need to know what was going on (in) the cockpit and the challenges facing the pilots. ... This will tell us a lot about what went wrong.\"

The flight data recorder, which stores a vast array of information about the aircraft, is still missing. The two devices are expected to be crucial in unraveling what led to the crash. Investigators typically spend months analyzing the recorders' data.

One piece of information is already clear: There was no distress call from the cockpit, the French Civil Aviation Authority said.

Why would a pilot not alert someone that there is an emergency? Does it hint at an incursion in the cockpit or a pilot's motives?

It might sound counterintuitive, but calling for help is not the first thing on a pilot's checklist when things go wrong.

Aviation analyst David Soucie said the first concern is to fly the plane, and secondly, to find the safest option for a crash landing, if it comes to that.

The Germanwings pilot \"was definitely aviating and navigating from what we can tell,\" Soucie said. The pilot was conceivably looking for a place to try to land, he said.

The final moments of flight

\"We heard a strange noise, and at first we thought it was an avalanche,\" said Sandrine Boisse, president of the tourism office at the Pra Loup ski resort said. \"Something was wrong. ... We didn't know what.\"

According to Germanwings, the plane reached its cruising altitude of 38,000 feet, and then dropped for eight minutes. The plane lost contact with French radar at a height of about 6,000 feet. Then it crashed.

This could indicate that there was not a stall, but that the pilot was still controlling the plane to some extent, CNN aviation analyst Mary Schiavo said.

The pilot could have been trying to make an emergency landing, or that the plane was gliding with the pilot's guidance, Schiavo said.

A scenario where the plane was gliding is potentially more dangerous because wide fields for landing would be hard to come by in the mountains, she said.

Victims from around the world

While many victims have not been publicly identified, the names and stories of some are starting to emerge.

Those aboard included a \"high number of Spaniards, Germans and Turks,\" according to Spain's King Felipe VI.

Germanwings CEO Thomas Winkelmann said it's believed 67 people, or nearly half those on the plane, are German citizens.

Among them: 16 students and two teachers from a German high school called Joseph Koenig Gymnasium, according to Florian Adamik, a municipal official in Haltern, the town where the school is located.

A Mass was being held Wednesday morning in Llinars del Valles, the Spanish town where the exchange students stayed, to mark the loss.

The Gran Teatre del Liceu in Barcelona posted a statement on its Facebook page saying two German opera singers who performed there this month in a production of \"Siegfried,\" Oleg Bryjak and Maria Radner, had died in the crash.

Radner was returning to Germany with her husband and child, a spokesman for the production company said.

Bryjak, a bass baritone, had performed in the Deutsche Oper am Rhein ensemble since 1996, the Dusseldorf opera house said on Twitter.

The theater will observe two minutes of silence for the victims Wednesday.

An Australian mother and son, Carol and Greig Friday, who were holidaying together were also among those killed, the Australian government said. A statement from family members said they were \"in deep disbelief and crippled with sadness\" at their loss.

When they do, they'll encounter a devastating scene. German Foreign Minister Frank-Walter Steinmeier called it \"a picture of horror.\"

\"The grief of the families and loved ones is immeasurable,\" Steinmeier said after flying over the area. \"We must stand with them. We are all united in great grief.\"