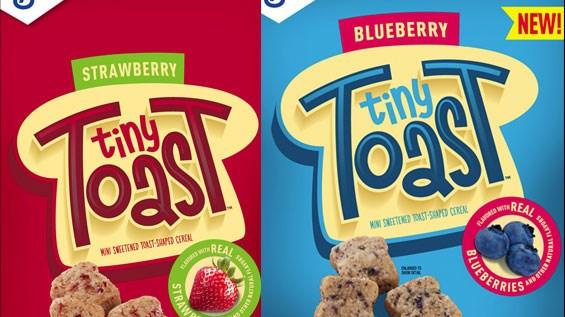 (CBS NEWS) In an attempt to revive interest in a food category whose sales have been soggy for years, General Mills (GIS) today announced the launch of Tiny Toast, the company's first new cereal brand in 15 years.

Tiny Toast is designed to appeal to younger, health-conscious consumers because it's one of the few breakfast cereal on the market flavored with real fruit and has no high-fructose corn syrup, artificial flavors or colors. It will join the Minnesota-based company's already formidable lineup of cereals that have been part of American breakfasts for decades such as Cheerios, Trix and Lucky Charms.

"The category is evolving and energized," said Alan Cunningham, General Mills' senior marketing manager, "and we recognized an opportunity within our portfolio and the category for a new offering with wholesome ingredients that appeals to young adults."

Though cereal remains America's most popular breakfast food, consumers, especially younger ones, are eating less of it than they have in past years as other options such as breakfast sandwiches and yogurt have surged in popularity, according to Darren Seifer, an analyst with market research firm NPD.

"We are seeing a lot of people make eggs in the morning, now that we're not so scared of cholesterol anymore," he said in an interview. "There's also a want for more protein in our diets. ... It's not so much that people dislike cereals."

Indeed, cereal makers are increasingly marketing their products as snacks and now offer many brands as breakfast bars. Cereal restaurants are even popping up in New York City and other cities.

Even so, General Mills may find it difficult to gain traction for Tiny Toast in the competitive cereal market. Moreover, as Seifer noted, cereal sales are highly dependent on providing deals to consumers, who have complained for years about rising prices.

"It's very risky to bring a new brand into a product where it's extremely crowded to begin with," he said, adding that getting consumers to both try Tiny Toast and get into the habit of purchasing it will be a challenge.

In recent months, Minneapolis-based General Mills has tried to make its cereals more appealing by revamping some recipes, such as adding more cinnamon to Cinnamon Toast Crunch. The strategy worked. According to the company, retail sales of Cinnamon Toast surged 8 percent as of the most recent quarter.

General Mills' relaunch of its Nature Valley Line of granola has also been a success. The company has added ready-to-eat muesli, granola bits and oatmeal. Sales of the brand have surged 35 percent on a year-over-year basis as of the last quarter and jumped 44 percent last year.