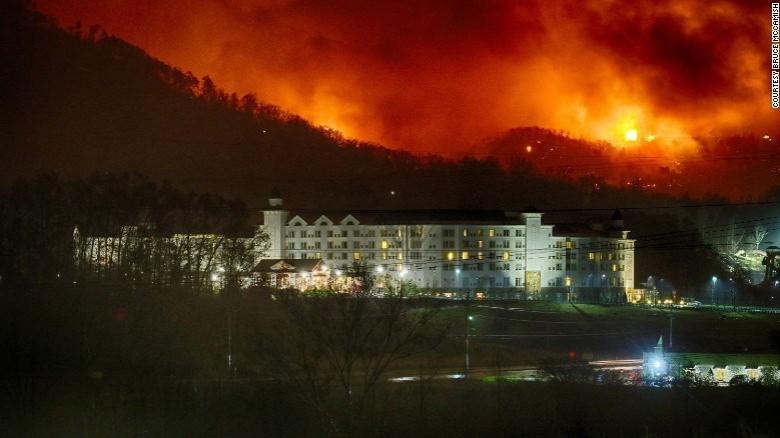 Authorities are working to identify all the victims and will notify their families as soon as possible, Sevier County Mayor Larry Waters said.

He said he thinks the three latest victims were adults.

"All of us are praying for those families and are very distressed at the loss of life in this situation," Waters said.

Several others are said to be missing after the blazes scorched roughly 15,000 acres in a resort-heavy area of eastern Tennessee, which showered residents with embers and forced tourists to evacuate from their accommodations. More than 700 buildings were either damaged or destroyed in Sevier County and in the Gatlinburg city limits, Waters said.

The fires spread with little warning Monday from the Great Smoky Mountains into inhabited areas in and near the resort towns of Gatlinburg and Pigeon Forge. Waters said about 53 people were injured, and many of them have been released from the hospital.

James Wood's mother is among those missing.

Wood said his mother was telling him on the phone the wildfire that had roared into Gatlinburg had ignited her home.

Then he lost the connection. He hasn't heard from his mom, Alice Hagler, since Monday night."We had been talking for several hours on and off," Wood told CNN affiliate WATE on Tuesday night. He had been living with his mother at her Gatlinburg house for the last five months but wasn't home that night.

"She called me at 8:30 (p.m.) and said the house was on fire. I told her to get out immediately. We got disconnected and I have not been able to get in touch with her since," said Wood.

Hagler's relatives say they hope she might be taking shelter with someone and just hasn't been able to make contact. It's a hope echoed by several other families who say their loved ones in the Gatlinburg area are missing.

"Our search and rescue teams are going out house by house," Waters told CNN on Wednesday. "There's a few areas that we were unable to get to on Monday night because of the swift nature of the firestorm ... and we're finishing those up today."Right now, search and rescue is our main challenge."

One of the bodies was found Wednesday in a burned motel, officials said.

The area could be helped by up to 2 inches of rain expected Wednesday into Thursday. But the stormy weather could also cause problems: Lightning strikes and winds -- gusts up to 30 mph are possible Wednesday -- could spark more fires, and the downpour could prompt flash flooding.

The fires that reached Gatlinburg began days earlier on a trail in the mountains 10 miles south of the city, National Park Service spokeswoman Dana Soehn said. But strong winds that began Sunday helped the fire spread into the Gatlinburg area on Monday.

Investigators believe the trail fire was "human caused," Soehn said, without offering further information, but it's still under investigation.Wildfires have burned in parts of the Southeast for weeks, fueled by the region's worst drought in nearly a decade.

Some major attractions such as the Ober Gatlinburg ski area and amusement park survived, but plenty of homes and other businesses were destroyed, and Gatlinburg residents have yet to be allowed back into the city to assess the damage.