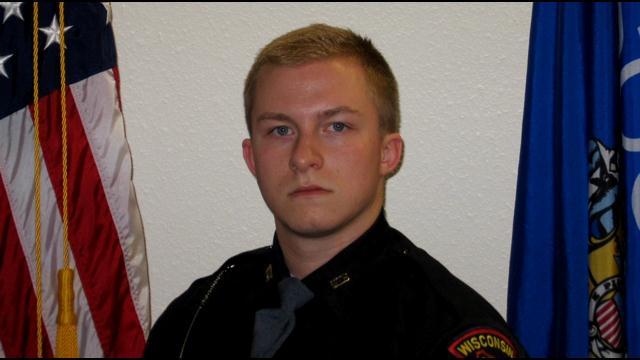 Funeral arrangements have been set for Wisconsin State Trooper Trevor Casper, who was killed in the line of duty while pursuing a bank robbery suspect on Tuesday night in the city of Fond du Lac. His obituary is below:

Trevor J. Casper, age 21, of Kiel, while faithfully serving his community as a Wisconsin State Trooper, died Tuesday evening, March 24, 2015.Trevor was born on May 21, 1993, in Sheboygan, son of Kevin and Deborah (Miller) Casper. He graduated from Kiel High School with the class of 2011. While attending Kiel High School he was active in wrestling and soccer as well as coaching youth soccer. Trevor was previously employed with Sunrise Bakery and Aqua Master in School Hill. After graduation from high school he attended Lakeshore Technical College, graduating in May, 2014 with a degree in Criminal Justice; while attending LTC he was active in the Color Guard as well as holding the position of President of the LTC student government. Trevor fulfilled his dream by continuing his education at the State Patrol Academy in July, graduating on December 18, 2014. Upon Trevor's completion, he was stationed at the State Trooper Base in Fond du Lac.Survivors include his parents: Kevin and Deborah Casper; two sisters: Lauren and Olivia Casper; his dear friend: Brittany Wilson; maternal grandfather: Elroy Miller; and paternal grandmother: Betty Casper. He is further survived by his aunts and uncles: Wayne (Janet) Miller, Gene (Kelly) Miller, Robert Miller, Roseann McLaury, Michael (Wendy) Miller, David (Ann) Miller, Mary (Ron) Hinz, Karen Halbach (Ron Gosz), David Casper, Cary (Patti) Casper, and John (Sherri) Casper; numerous cousins, other relatives and friends.Trevor was preceded in death by his maternal grandmother: Rose Mary Miller; paternal grandfather: Kenneth Casper; uncle: Jack Bushman; and cousin; Cory Halbach.Funeral Services for Trevor will be held on Sunday, March 29, 2015 at 5:00 PM at Kiel High School (210 Raider Heights), Kiel. The family will greet relatives and friends from 12:00 PM (Noon) until 4:45pm on Sunday, March 29, 2015 at the high school A Private Burial will follow on Monday at SS. Peter and Paul Catholic Cemetery, Kiel. In Lieu of flowers memorials may be made in his name.The family would like to extend their appreciation to the Kiel Chief of Police: Dave Funkhauser and the Wisconsin State Patrol for all of their kindness shown to our family.Meiselwitz-Vollstedt Funeral Home, Kiel is assisting the family with funeral arrangements.