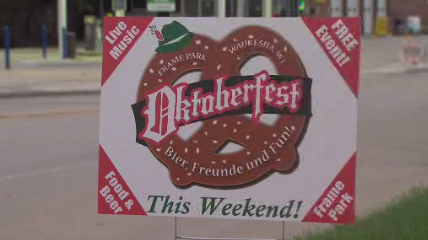 WAUKESHA -  The tapping of the keg was a fitting way to start Oktoberfest. But, the long line of people is what organizers were really excited for. This weekend marked the first Oktoberfest in the city.

A number of local organizations benefit from the money that is paid for beer and food tickets at Waukesha's Oktoberfest. One of those groups is The Waukesha Citizens Police Academy Association.

"What that money is used for is money that taxpayers don't picture funding the police department with," Sergeant Jerry Habanek with the Waukesha Police Department said.

Tax dollars buy bullets, police cars, and things like that. But, there's no denying the fact that technology plays a huge role in fighting crimes these days. Gone are the days of protractors and a pencil.

"These technology devices that they have purchased have really allowed us to maximize on the human resources that we have at the police department. We live in some difficult times right now with a lot of misperceptions and misconceptions going on, and that's why it's so important for my organization to show that we do support our local law enforcement," Dawn Lawien with the Citizens Police Academy Association said.

There are a number of organizations to get a piece of the proceeds. Waukesha Oktoberfest continues tonight until 9 p.m. at Frame Park.