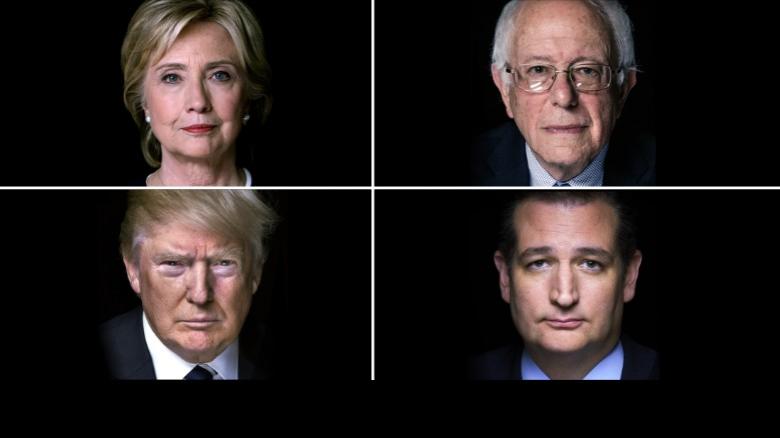 Washington (CNN)Donald Trump and Hillary Clinton notched convincing victories in Arizona, picking up the biggest prize on Western Tuesday that moved the front-runners ever closer to a general election clash.

The Arizona wins handed enough delegates to Trump and Clinton to help them maintain their leads in the delegate count despite victories from their primary competitors.

Bernie Sanders won morale-boosting Democratic victories in Utah and Idaho while Ted Cruz came out on top in the Utah Republican caucuses.

But the big win for Cruz was meeting the 50% threshold in Utah, according to a CNN projection, that hands him all of the state's 40 delegates. The Texas senator needed a win of that magnitude to avoid falling further behind Trump in the GOP delegate race.

Trump tweeted his thanks to voters in Arizona with its 58 delegates, claiming his victory in the winner-take-all primary was much larger than expected.The former reality star's victory kept his momentum rolling despite concerted efforts by prominent conservative groups and top establishment figures like former GOP nominee Mitt Romney and Sen. Lindsey Graham and super PACs run by veteran party operatives to line up support behind Cruz in a late-in-the game effort to halt the billionaire.Trump repeatedly boasts about the failure of millions of dollars in attack aids to wound his campaign, and insists he is on pace to reach the 1,237 delegates needed to win the nomination.

Clinton said she was "very proud" to have won Arizona and hit Republican candidates who she said were "literally inciting bigotry and violence."

Speaking in Seattle, she said the devastating terror attacks in Brussels on Tuesday underscored why America needs a "steady" commander in chief, taking another clear shot at Trump.

"I do believe I am the most ready of anybody running to take this job," Clinton said.

Sanders' Utah and Idaho wins and an expected strong performance by the Vermont senator in a trio of caucuses in Washington State, Alaska and Hawaii on Saturday will bolster his campaign's insistence that he is right to stay in the race.

"When we began this campaign we were considered a fringe candidacy," Sanders said on Tuesday night San Diego, his voice hoarse from months on the campaign trail. "Well, 10 months later we have now won 10 primaries and caucuses. Unless I am very much mistaken, we are going to win a couple more tonight."

A total of 2,383 delegates is needed to clinch the nomination.