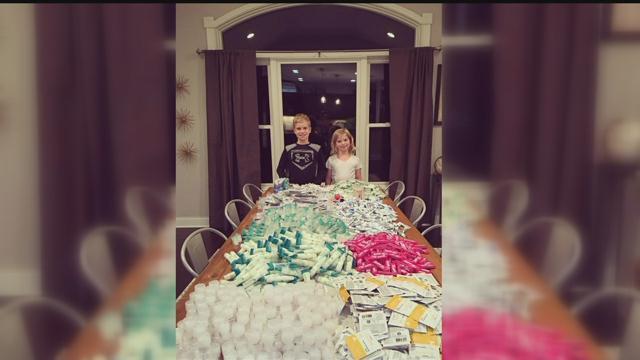 We first met the Wilks family a year ago, when eight-year-old Vance, who had spent many nights in the hospital decided to give back and give hundreds of toys to other sick kids.

Now, we're happy to report his sister is getting in on the act.

"They said get him to the ER now and we went with phones in hand and that was it," said Amanda Wilks, mother to Vance and Harley Wilks.

In 2014, during an MRI the Wilks family was told their son Vance had a tumor and they ended up spending nearly an entire summer in the ER at Children's Hospital.

Thankfully, the surgery was a success but the Waterford family will never forget that day or how helpless they felt without their stuff.

"It's pretty boring at the hospital with no toys so I wanted to get toys for the children there," he told us.

Its also why Vance has collected toys at his dad's golf club for other little patients, more than 1500, over the past three years.

"It doesn't take that much time and its what we do because when Amanda and I left, we left with Vance," said Chad Wilks, the children's father.

And why little sister Harley is creating care packages for parents just like her own.

"I like to bake and I wanted to help," said Harley.

"So Har came up with about 900 dollars over the summer and we spent that on these travel size items to make little care packages for parents," said Amanda.

Between the money collected from Harley's treats to donations from the community, this eight year old has collected enough to create 200 parent care packages.

"I think parents put themselves in that position--that could be us. We could be there, so they're willing to help," said Amanda.

But judging from her parents stories Harley's not done yet.

"It was a wad of money in a lego bag. And she said 'Dad, I want to donate this tomorrow," said Chad.

They're happy knowing they're raising children with grateful hearts.

"And I said what do you mean? And she said, 'I don't need any money, I have everything I need," said Chad.

The Wilks family says Children's Hospital will hand these bags out as needed and wants to remind the public that they're still looking for toy donations, specifically baby toys this year.