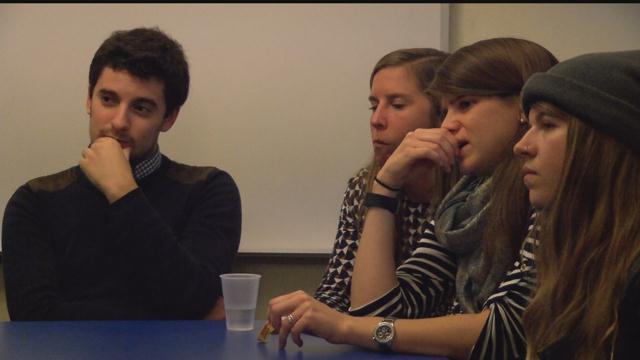 French nationals living or studying here watched the drama unfold on TV. Saturday night,  many of them got together to comfort each other.

Early Saturday night at the Milwaukee French Alliance Center dozens of people showed up to share their stories. They're scared, shocked and upset, but they said this attack won't take away the spirit of Paris.

"I was searching on the web and I saw many alerts on the French news and I thought, 'Not again.' My first reaction was to call my family because I am from Paris," said Hugo, an exchange student and native Parisian.

Like many others, Hugo found out about the attacks via social media and quickly was able to identify his family and friends were OK.
But others like Charlotte weren't so lucky.

"My mom had tried calling me like 12 times and she told me there were bombs and a shooting at the concert hall. I sadly learned that one of my cousins and friends and brother's friends died in the concert," said Charlotte.

As everything unfolded in Paris, it was mass confusion over there and right here in Milwaukee, as French nationals called, texted, and searched social media trying to get a response from their loved ones.

"We stayed awake until they did," said student Khadijah.

To add to the confusion, because the attacks happened late at night, often times, the news was broken to those in France, by their American based family.

"So I called up my brother and everyone was sleeping, and he said 'no we're fine, what's going on why are you calling me so late?' " said JP Reefert.

Saturday night these French nationals took solace in one another, grateful for a night that felt like home, but also so thankful for  all of the American support.

"We really feel supported. The French flag on Facebook, and all the Americans helping. Its awesome to see," said Juliet, another French national.

They're all saying Paris will overcome and her people will be better for it.

"We can't stop living; its just what they want, changing what we do; its what they want and we don't have to do that," said Hugo.