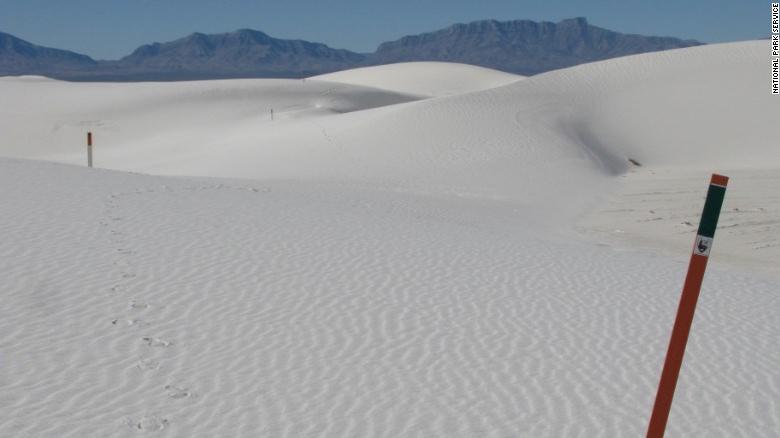 (CNN) -- The sun and heat are harsh in the summer, and shade is nowhere to be found. But from all over, people come to admire the otherworldly beauty of the wave-like white dunes and to hike a trail marked only by posts staked deep in the gypsum sand.

Hikers at the White Sands National Monument in New Mexico are warned about the desert conditions and advised to take many precautions. In the summer, those include drinking lots of water -- a gallon a day is recommended -- and resting frequently. Temperatures often top 100 degrees.

That heat claimed the lives of a French couple hiking the undulating dunes of the Alkali Flat Trail with their 9-year-old son. The mother and father were both overcome by the temperature and died of heat-related illness, collapsing at different points along the trail, the local sheriff said.

The mother turned back when she didn't feel well and died on her way to the car. Unaware she had collapsed, the father and son continued on -- but the man, too, became disoriented and then died with the boy at his side, Otero County Sheriff Benny House said.

Though dehydrated, the boy survived. But he might not have made it were it not for a sheriff's deputy who was first called to help the child's mother.

The clue on a camera

They called the Otero County Sheriff's Office, which sent deputies and emergency responders, but 51-year-old Ornella Steiner already was dead.

\"They were trying to figure out why she was on the trail by herself,\" Sheriff Benny House told CNN.

Looking at Steiner's camera for clues, the deputy saw photos of a man and boy at the park's entrance. They were unaccounted for, House said, so deputies then extended their search.

Deputies found the father and son about 45 minutes later, slightly off the trail. David Steiner, 42, was dead. The son, whose name was not given, was with him.

\"He wasn't crying,\" House said, but \"he was dehydrated and of course he was upset.\"

Overcome by the heat

The boy was taken to a hospital and French consular officials were notified, House said. But the boy didn't speak English, so in the meantime the sheriff's office found an interpreter -- the mother of a deputy's girlfriend, who is fluent in French.

From what the boy told investigators, the sheriff said, the family got about a mile and a half down the 4.6-mile-loop trail when the mother, who already wasn't feeling well, tumbled and aggravated a previous knee injury.

She headed back to the trailhead but made it only about 300 feet before collapsing.

The son and father continued walking for another 2,000 feet, unaware of the mother's collapse, but the father grew delirious and \"started to make some bad decisions for the child,\" the sheriff said.

\"He kept telling the son that the vehicle is 'right over here, right over here,'\" House said. He was disoriented, and \"the heat was affecting his judgment.\"

An autopsy on the parents isn't back yet, House said, but the medical examiner says their deaths appear heat-related.

Alkali Flat Trail takes visitors through the scenic white sand dunes to the edge of the Alkali Flat, a lakebed that dried up thousands of years ago, after the last ice age. There is no shade among the dunes, the highest of which rises about 60 feet, and sparse short shrubs are the only vegetation.

It's not the most heavily used trail at the park because it's strenuous and long, going up and down for 2.5 miles before it loops back around, Sauter said.

The trail's path isn't visible in the sand. Instead, the way is marked by white posts with orange reflective tape, planted 3-to-4-feet deep in the sand and set varying distances apart but intended to be visible from post to post. Hikers walk from one trailpost to the next.

With the blowing wind and sand, park employees frequently have to check that the markers haven't fallen down. Visitors are told to turn back if ever they can't see the next one.

On the day the Steiners died, the high temperature was 101 degrees under sunny skies, Sauter said.

\"It was a typical summer day. We hit the low 100s throughout the summer almost every day,\" she said.

Once hikers get into the dunes, she said, \"there is no shade. There is no cover. You are out exposed to the sun, the wind, the heat, the reflection of the sun off the white sand. It's a harsh desert environment.\"

On the White Sands National Monument website, the Park Service warns visitors that heat-related illness is common in warm weather and can be fatal. It advises people to hike during cool times.

\"Carry food and at least two quarts of water,\" it says. \"Rest, eat and drink when tired. Drinking water is available only at the Visitor Center. The white sand reflects sunlight. Protect all exposed skin from sunburn. Protect your eyes by wearing sunglasses. We recommend that you do not hike alone.\"

The Steiners' deaths were the third and fourth at the park in the past 10 years, the sheriff's office told CNN affiliate KVIA.

'It's just a tragedy'

Sauter said the park offers its condolences and sympathies to the Steiners' family and community in France.

\"None of us want to ever see an incident like this, so we just try to arm the visitors as best as possible so they can make good decisions for themselves and their families for their visit,\" she added.

The boy's grandmother arrived in Albuquerque from France on Thursday and employees from social services took the boy to be with her, the sheriff said.

\"It was the perfect storm for this family. They started off the trek with two 20-ounce bottles of water. When we got there, there was no water left in the bottles.\"