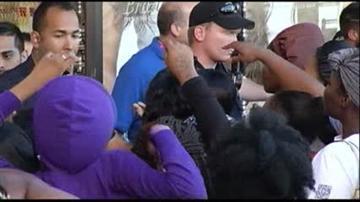 (CNN) -- Police used pepper spray on shoppers after a scene broke out at a beauty supply store on Friday.

The incident was reported at Beauty Exchange on Pine Hills Circle.

As part of the store's grand opening, it was giving away free hair extensions valued between $55 and $100.Shoppers started lining up Friday morning and by 8:30 a.m. there were several dozens of people in line. Pushing and shoving occurred and a pregnant woman was pushed down.

In surveillance video, Orlando police is spotted trying to get the crowd to back up and when they wouldn't back up, at least two officers started to use pepper spray on the crowd.

The video shows one officer spraying at eye level.