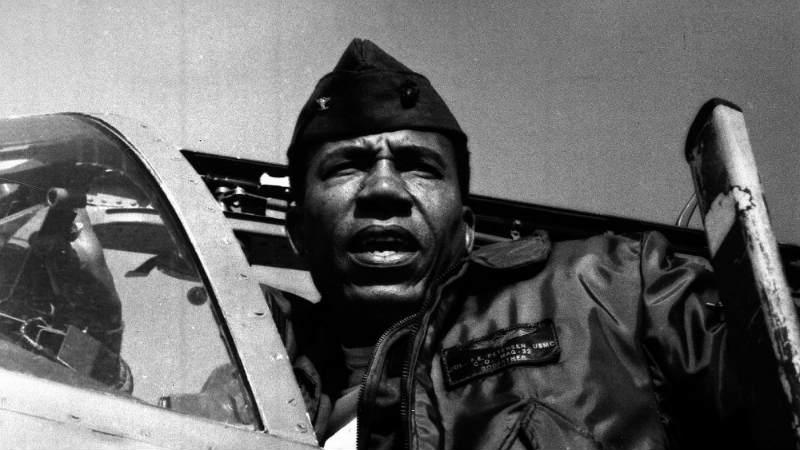 Those are just some of the accolades given to Frank Petersen, the first African-American Marine aviator, who died this week at 83.

Petersen, who served for 38 years, was \"a stellar leader,\" the Marine Corps said Wednesday in announcing his death.

Details about how or where he died were not available, but media reports said he died from lung cancer.

Petersen retired in 1988 as a lieutenant general and the first black general in Marines' history.

He told The Washington Post at the time of his military retirement that he felt he had improved things for African-Americans.

\"As much as I would like to philosophize and say that it hasn't, it has made a difference,\" he told the newspaper of his career.

Petersen enlisted in the Navy in 1950 and a year later entered the Naval Aviation Cadet Program. A year after that, after completing his training, he became the first African-American pilot in the Marines.

Petersen said he dealt with the notoriety of being the \"first\" by not focusing on it.

\"Once you begin to wear the cloak of being Superman, then you become nothing. All of that is related strictly to a matter of race,\" Petersen said in a video interview with the National Visionary Leadership Project. \"It's nice when there is a first, but the last thing America needs is a first and an only.\"

He flew more than 350 combat missions over Korea and Vietnam. According to The New York Times, he and his F-4 were shot down in 1968.

When he returned home from the war in Korea, Petersen said he felt a \"bitter taste\" like acid when dealing with the racism that still was evident in the United States at the time.

\"You still had to come to grips with the (fact the) country still hasn't really changed,\" he said.

Petersen said when he and his family traveled the country by car during this time and faced difficulties in obtaining accommodations because of race, he often wore his military uniform.

\"I felt the uniform would give me some protection because if nothing else, it would make it a federal offense if something were to be done to me,\" he said in the National Visionary Leadership Project video.

Even before his military career started, he faced racial stigmas.

In his autobiography -- \"Into the Tiger's Jaw: America's First Black Marine Aviator\" -- Petersen recounted the tale of a recruiter who had him retake his entrance exam, a test Petersen deemed \"relatively unremarkable.\" His score was high and Petersen realized the recruiter must have thought he cheated.

\" 'Would you mind,' he grated, 'retaking the examination? Just to make sure?' My eyes lasered. I was right. It was clear he'd thought I'd cheated,\" Petersen wrote.

Insulted, Petersen \"zipped through the test again,\" this time scoring better than he did the first time.

The recruiter, in trying to congratulate him, ended up enraging him.

\"Petersen, my boy, the Navy has opportunities for guys like you,\" the book recounts. \"What a great steward you'd make.\"

Another time, a Marine captain accused him of impersonating an officer. He was arrested despite the fact he really was a second lieutenant.

After leaving active duty in 1988, Petersen worked for DuPont as a vice president for corporate aviation, The New York Times reported. He left the corporate world in 1997.