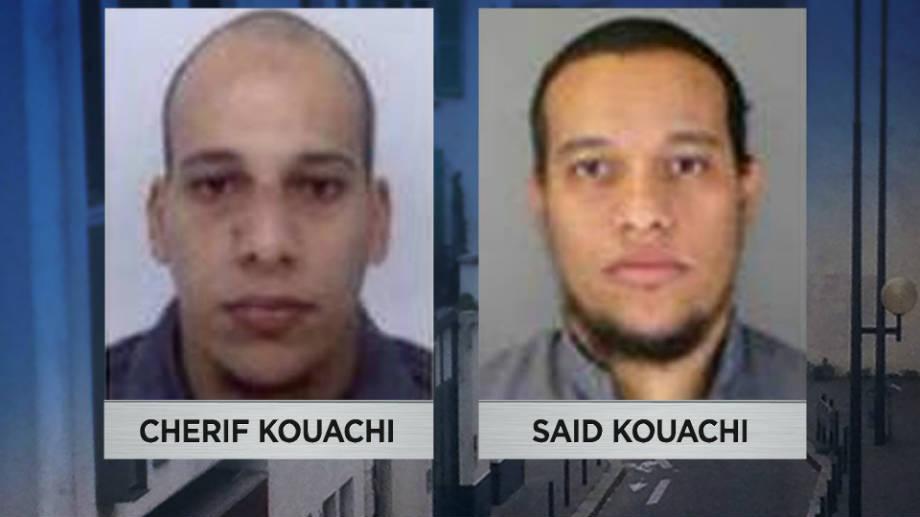 PARIS (CNN) -- Three terrorists -- one suspected in the fatal shooting of a policewoman, the other two in the massacre at the offices of Charlie Hebdo magazine -- were killed Friday in separate raids in France, authorities said.

A hostage being held at a printing shop in Dammartin-en-Goele survived, and people ran out of a kosher grocery store in eastern Paris where hostages were being held. But authorities' work isn't over: A female suspect in Thursday's fatal police shooting is still at large.

• A man claiming to be Cherif Kouachi called CNN affiliate BFMTV on Friday and said that he trained in Yemen with al Qaeda in the Arabian Peninsula and that he met with Anwar al-Awlaki, the American-born Muslim who was the face of AQAP until he was killed in the fall of 2011 in a U.S. drone strike.

• Dammartin-en-Goele Mayor Michel Dutruge told France Info radio that he is breathing \"a big sigh of relief\" after the conclusion of the standoff in his village.

• The male hostage who was being held by the Kouachi brothers inside a printing business in Dammartin-en-Goele is safe, Othis Mayor Bernard Corneille said.

• Four helicopters, including a medical helicopter, landed at a site near where the operation took place.

• Men were on the roof of the building where the Kouachi brothers -- the suspects in the massacre at the offices of Charlie Hebdo -- are believed to be, images from CNN affiliate BFMTV showed. Smoke could be seen rising from the building.

• A helicopter landed next to the building.

• Shots were heard shortly before 5 p.m. around the industrial area where the brothers were thought to be surrounded by law enforcement. At least large explosions were also heard.

• Yves Albarello, who is in France's parliament, said on French channel iTele that the two suspects told police by phone that they wanted to die as martyrs.

• A salesman, who identified himself only as Didier, told France Info radio that he shook one of the gunman's hands around 8:30 a.m. Friday as they arrived at a Dammartin-en-Goele printing business -- the same place where the Kouachi brothers are thought to be. Didier told the public radio station that he first thought the man, who was dressed in black and heavily armed, was a police officer.

• Dammartin-en-Goele residents were told to stay inside, and schools were put on lockdown, the mayor's media office told CNN on Friday. Shops in the town have been told to close.

• Interior Minister Bernard Cazeneuve wouldn't comment on the number of people injured or dead in either of the operations conducted Friday. Earlier, French Ambassador to the United States Gerard Araud tweeted that the hostages in the grocery store siege were alive, but French police officials have not commented on the state of hostages.

• Amedy Coulibaly, who goes by the alias Doly Gringy, was a close associate of Cherif Kouachi, one of the Charlie Hebdo suspects also killed Friday, a Western intelligence source told CNN. The two were involved in a 2010 attempt to free an Algerian serving time for a 1995 subway bombing.

• Hayat Boumeddiene, the 26-year-old woman wanted in Thursday's fatal shooting of a policewoman outside Paris, escaped Friday from the grocery store in the confusion as hostages ran away, Alliance Police Union spokesman Pascal Disand said. She'd been in the market with Coulibaly, the other suspect in Thursday's deadly incident. The FBI also said that French police were trying to find Boumeddiene.

• Some police were injured in the operation at the eastern Paris kosher grocery store, according to Disand. At least 10 hostages escaped, and Coulibaly was killed, according to the union spokesman.

• The hostages being held at the market near Porte de Vincennes are alive, and \"the terrorist is dead,\" tweeted Gerard Araud, the French ambassador to the United States. French police and interior ministry officials have not commented on the state of hostages.

• Police at the scene of the grocery store siege shouted \"get down!\" and \"we've got him,\" video from CNN affiliate BFMTV show.

• Police could be seen leaving the eastern Paris grocery store, where hostages were being held, with people late Friday afternoon.

• The hostage-taker there demanded freedom for the Kouachi brothers -- the suspects in the massacre at the offices of Charlie Hebdo -- witnesses said, according to Disand.

• Dozens of schools were placed under lockdown because of the hostage situation in eastern Paris, police said.

• Authorities haven't said how many are being held, or if anyone has been killed.

• Police anti-terror units raced to the scene of the hostage situation early Friday afternoon, while ambulances blared as they moved away from it. Roads around the area have been blocked off.

• French President Francois Hollande will give a speech at 8 p.m. (2 p.m. ET) after law enforcement members' operations in eastern Paris and Dammartin-en-Goele, his office said.

• Said Kouachi, one of the two brothers suspected of killing 12 people in and around the provocative satirical magazine Charlie Hebdo in Paris, spent several months in Yemen in 2011, receiving weapons training and working with al Qaeda in the Arabian Peninsula, which is based there, U.S. officials said Friday.

Henri Dunant elementary school should be a place to learn, to play, to be a kid.

Not to hide in fear of killers on the loose. But that's what students did for hours Friday, there and at many other schools around Dammartin-en-Goele.

By late Friday afternoon, some of them were finally allowed to leave, though they weren't alone. Police officers accompanied the children -- holding their hands as they guided and, in some cases, lifted them onto an awaiting bus that would take them to safety.

The Interior Ministry reported the schoolchildren were being evacuated to sports facilities in nearby Mitry-Mory.

One father, who lives across the street from a school and asked to be identified only as Teddy, described the situation as \"very worrying.\"

Two days ago, it was all about Charlie Hebdo, the magazine whose offices came under ruthless attack, with staff members called out and summarily executed.

Now, it's about Cherif Kouachi, 32, and Said Kouachi, 34, the brothers allegedly behind that horrific violence, who set off a massive manhunt after they got away.

Authorities followed a lead Thursday morning from a gas station attendant near Villers-Cotterets, about 40 kilometers (25 miles) from Dammartin-en-Goele, whom the Kouachis reportedly threatened as they stole food and gas. Police think the brothers may have later fled on foot into nearby woodlands.

Northern France's Picardy region is the focal point of the manhunt, with Prime Minister Valls putting it on the same, highest-possible alert level as has been in place since Wednesday in and around Paris.

And police spying down with night vision optics from helicopters say they think they caught a glimpse of them Thursday near Crepy-en-Valois, France -- not far from the reported robbery.

That town and the gas station border on a patch of woods, and on another side of the forest, 30 to 40 police vehicles swarmed out from the town of Longpont.

Squads of officers armed with rifles -- some in helmets and with shields -- canvassed fields and forest.

They didn't find the Kouachi brothers there. Instead, somehow, they're believed to have moved to Dammartin-en-Goele.

Other places, other troubles

More than 80,000 officers deployed across France to try to intercept the brothers and anyone else -- like those behind the Montrouge shooting, which authorities ruled a terror attack -- intent on inflicting harm.

\"France is living through a trial, when we see the worst massacre of this kind in the last 50 years,\" Hollande said Friday. \"It shows when a newspaper is attacked that it's because it's the expression of liberty itself.\"

As they stand guard against more bloodshed, authorities are working to piece together what's happened already and the backgrounds of those responsible.

Police have detained at least nine people in connection with the Charlie Hebdo investigation, in addition to searching residences in a few towns.

They're also trying to learn more about the brothers they believe carried out the horrific attack.

His older brother, Said, the elder of the Kouachi brothers, has been to Yemen, a French official said. There, he had weapons training with al Qaeda, a U.S. official with access to French intelligence said.

Cherif Kouachi was sentenced to three years in prison for being part of a jihadist recruitment ring in Paris that sent fighters to join the conflict in Iraq.

An ISIS radio broadcast Thursday praised the attackers, calling them \"brave jihadists.\" But the broadcast did not say whether the two had any connection to the militant group.

Charlie Hebdo's staff is as defiant as it was after its former offices were fire-bombed in 2011, the day it was to publish an issue poking fun at Islamic law.

Back then, editor and cartoonist Stephane Charbonnier, \"Charb\" for short, said it would not slow them down one bit. The magazine continued lampooning world religions, politics and society in its hallmark profane -- at times vulgar -- style.

Some have found their drawings offensive, but they are not uncommon for European comic satire aimed at an adult audience.

Since the attack, Charb was guarded day and night, a journalist who knew him told CNN. Yemen's al Qaeda in the Arabian Peninsula placed him on a list of assassination targets.

He was among those killed Wednesday, along with four other well-known cartoonists known by the pen names Cabu, Wolinski, Honore and Tignous.

Patrick Pelloux, a columnist for the magazine and also a trained paramedic, rushed to the offices when he heard about the shooting.

\"I don't know if I'm afraid anymore, because I've seen fear. I was scared for my friends, and they are dead,\" he told CNN's Anderson Cooper. \"I know that they didn't want us to be quiet. They wanted us to continue to fight for these values, cultural pluralism, democracy and secularism, the respect of others. They would be assassinated twice, if we remained silent.\"