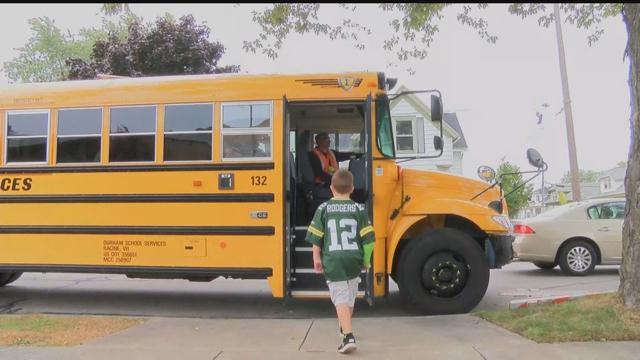 Last Thursday Jayden Jaramillo and his two sisters got on a bus, ready for another day at Trinity Lutheran. They didn't know their journey to school would take such an unexpected turn.

He thinks of himself as a hero, and no one would disagree with him, after saving his bus drivers life while on the way to school Thursday morning.
She'd only been his driver for a week, but Jayden knew from the moment he got on the bus, driver D'aquisha  Adams wasn't OK.

"So we got on the bus and she started coughing a lot and she couldn't breath, so she pulled over," he said.

It was on the corner of Pritchard and Durand, just a half mile from Jayden's house where the bus driver pulled over, realizing she couldn't go any farther.
It was then that Jayden closed the boOK he was reading and jumped into action.

"I just wanted to go up there and help her and I got the radio and then I knew where we were at somehow, so I said where we were at and so the bus company had 911 on the phone too," said Jayden.

Because of Jayden, an ambulance rushed Adams to the hospital and another driver was sent to take the kid's to school. Mom Nicole is impressed with her son's quick thinking and compassion, but isn't surprised.

"He has a heart of gold. He wakes up with a smile on his face every morning, he takes care of other people. We try to teach our kids to be good people and raise them into be good adults and he is definitely going to get there," she said.

Perhaps with a few more live saving moments on that journey.

The bus company tells us the driver did suffer from an asthma attack and was treated at a local hospital. She's expected to be ok, and is very grateful Jayden was on her bus.