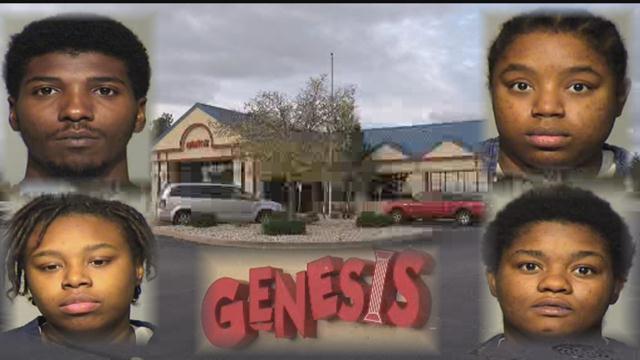 At a Denny's restaurant off of North Ave. in Wauwatosa, police said three women and a man walked in wearing hooded sweatshirts covering their faces.

Shalonda Davis, 25, told authorities it was her idea to rob the place and she was the one who pointed the gun at the clerk demanding money.

The criminal complaint states it was 22-year-old Jonathon Brown's job to grab the cash and Markeyda Oldham, 23, acted as the lookout. Berdashia Davis, 24, told authorities she drove the getaway car, a minivan, after they stole about $200 from the Denny's cash register.

En-route to their next target in Greenfield, the van was spotted by an off-duty Wauwatosa detective, who followed the foursome to Genesis restaurant.

Investigators said the suspects executed the same plan of attack from just minutes before, running from the scene with about $800. But the detective followed them and Greenfield police pulled the van over.

All four people inside were arrested. An officer found a .45-caliber gun in the van's glove box.