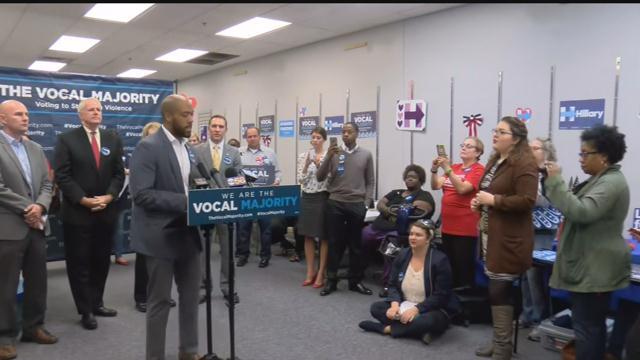 Former Congresswoman Gabby Giffords was in Milwaukee Friday, campaigning for Hillary Clinton, and speaking out against gun violence.

The stop was part of a 6-week long bus tour, called "Vocal Majority", aimed at "urging voters to support candidates who are committed to taking steps to reduce gun violence."

Giffords still struggles to walk and talk after she was shot in the head while meeting with constituents outside Tucson Arizona in 2011. She spoke very briefly at Friday's event.

"Speaking is difficult for me, but come January, I want to say these two words; Madam President," she told the crowd. "In the white house, she will stand up to the gun lobby, that's why I'm voting for Hillary."

Giffords was joined by Milwaukee Mayor Tom Barrett and a handful of Democrat state leaders. The event followed another deadly night in Milwaukee, with Milwaukee Police responding to their 102nd homicide of the year on Thursday.

"You feel like you're hearing about these stories all the time, because they're happening all the time," Sen. Chris Larsen told the audience.

Democrats called for expanded background checks on gun purchases, and an end to private sales of guns.

The NRA released the following statement to CBS-58 in regards to Giffords' appearance.

“This election is about law-abiding Americans' right to have a firearm in their home for self-protection. Hillary Clinton has said the Supreme Court got it wrong on the Second Amendment and she would  appoint an anti-gun Supreme Court nominee who would vote to overturn Heller , which guarantees  the fundamental right to have a gun in your home for self-protection. A shift in the Supreme Court would pave the way for extreme gun control including banning entire classes of firearms.”

Wisconsin Carry President Nik Clark countered the points made at Friday's event, saying expanded background checks would do little to stop the violence Milwaukee is facing.