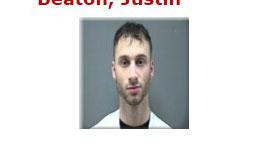 The former substitute teacher at Racine’s Case High School  and Horlick High School has been charged with sexually assaulting a student.

Justin Beaton has been charged with two counts of child enticement, two counts of sexual assault of a student by school staff and one count of exposing a child to harmful material.

Mount Pleasant Police Department was notified Beaton sent a 16-year-old student at Case High School a picture of his penis over snap chat during Christmas break.

She told police she agreed to meet up one day in January with Beaton. Beaton picked her up from her house and they drove around and parked at Quarry Park. The student said they made out, and at one point he tried to pull her pants down but she pulled them back up.

The police, also, spoke with another student from Horlick High School that Beaton exchanged text messages with. The texts contained comments about the student’s breast. The student said she met Beaton while he was substitute teaching. She met Beaton at Humble Park in February where they drove around and ended up in Kenosha. She said once they parked he kissed her and touched her breasts.