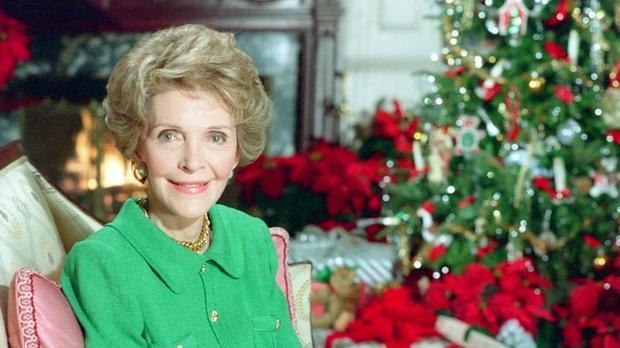 In addition to her famous campaign against drugs, the one-time actress promoted several causes while she was in the White House and even in the years after. She was a passionate advocate for lifting restrictions on stem cell research and promoting better treatment of America's veterans.

But above all, Nancy Reagan was a fiercely devoted wife.

"My life began with Ronnie," she told Vanity Fair magazine in 1998.

The first lady's public life had its share of controversy but also earned the respect of the nation, making Nancy Reagan one of America's most admired women in the 1980s and beyond.

Anne Frances "Nancy" Robbins was born on July 6, 1921 in New York City to Kenneth Robbins, a car salesman, and Edith Luckett Robbins, an actress. Her parents divorced, and Nancy was raised by her aunt in Maryland while her mother returned to the stage. Edith Robbins' second husband, a Chicago doctor named Loyal Davis, adopted Nancy in 1938.

After receiving a degree in dramatic arts from Smith College, Nancy Davis pursued an acting career of her own. After performing on Broadway, she landed a contract with MGM in 1949, moved to Hollywood and ultimately appeared in 11 feature films. In her last movie, the 1956 film Hellcats of the Navy, Nancy appeared with her then-husband, Ronald Reagan.

Nancy Davis met Ronald Reagan in 1951, when he was president of the Screen Actors Guild, and they married the next year. The couple had two children together, Patricia Ann and Ronald Prescott.

When Ronald Reagan served as governor of California from 1967 to 1975, Nancy Reagan took an interest in the welfare of Vietnam veterans, visiting the wounded and engaging in projects concerning POWs. She also helped sponsor Foster Grandparent, a program founded by Sargent Shriver that pairs senior citizens with handicapped children. Later as first lady of the United States, she helped expand Foster Grandparent on a national level.

As first lady, Nancy Reagan primarily devoted herself to drug education and the prevention of drug abuse among young people. By 1988, more than 12,000 "just say no" clubs had been formed internationally, according to the Reagan Foundation, while Reagan criss-crossed the country to visit schools and talk to children in the issue.

In 1985, Nancy Reagan hosted an international conference at the White House focusing on drug prevention among youth, attended by the first ladies of 17 countries. The first lady considered a personal victory, according to the Reagan Foundation, when in 1986 President Reagan signed into law the the "National Crusade for a Drug Free America" anti-drug abuse bill. In October 1988, Nancy Reagan addressed the United Nations General Assembly, urging the international body to drug education and the enforcement of drug laws.

While known for her positive causes, Nancy Reagan also drew criticism for some of her actions as first lady. After deciding to renovate and redecorate the White House during her husband's first term, the first lady was castigated for spending lavishly during a recession. "I didn't want to redo the White House in my own image, but I did want to restore it," Reagan wrote in her 1989 memoir, "My Turn."

Reagan also used her memoir to address the even harsher scrutiny she received for turning to astrology to at times adjust her husband's schedule, following the 1981 assassination attempt on the president. "Astrology was simply one of the ways I coped with the fear I felt after my husband almost died," she wrote. Nancy Reagan's use of astrology in the White House was revealed by Mr. Reagan's chief of staff Donald Regan, after he was replaced.

After leaving the White House in 1989, Mrs. Reagan continued her anti-drug campaign by forming the Nancy Reagan Foundation. When Ronald Reagan was diagnosed with Alzheimer's disease in 1994, the couple formed the Ronald and Nancy Reagan Research Institute in Chicago, an affiliate of the Alzheimer's Association.

The former first lady devoted much of the next decade to caring for her ailing husband. She became an advocate for stem cell research in the hopes of finding a cure for Alzheimer's, often placing her at odds with the Republican Party.

She is survived by two children, Patti Davis and Ronald Reagan Jr.