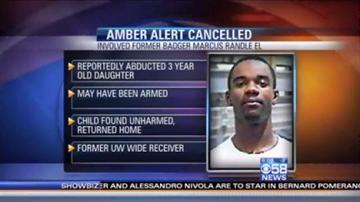 27-year-old Marcus Randle-El had taken his daughter Thursday night in Lansing, IL, and that he may have been armed.

The child was returned home overnight. Police have not said where she was found or who she was with, and what prompted the alert.

Randle-El played wide receiver for the Badgers about ten years ago.