For Davis Love III, a father-son outing at the US Open 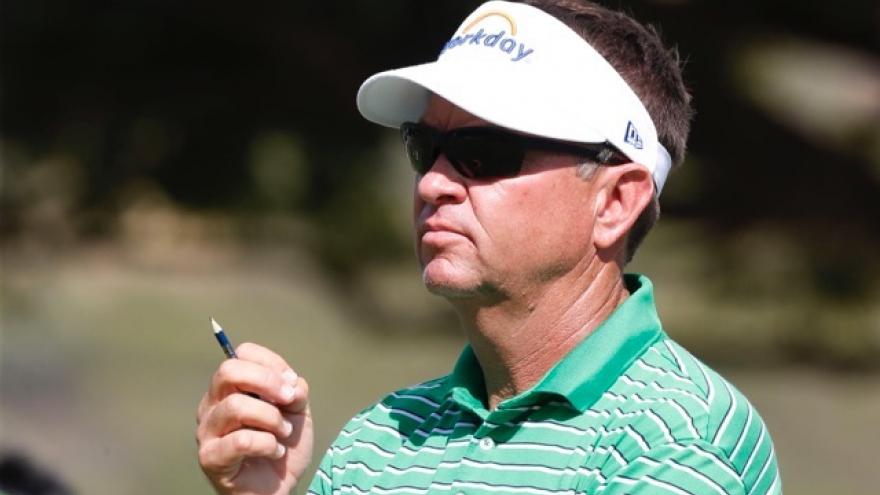 ERIN, Wis. (AP) — Davis Love III is making his 24th appearance in the U.S. Open, with one big difference.

He'll only have clubs in his hand to clean them, not hit any shots. And for the first time, he'll be wearing shorts at a major championship.

Love is caddying for his son.

Davis Love IV, who just finished at Alabama and turned pro, qualified for his first U.S. Open as an alternate from the Georgia sectional qualifier.

"I'm excited for him," Love said Sunday afternoon as he watched from some 300 yards away as his son, who goes by "Dru," teed off during a practice round with Ryder Cup captain Jim Furyk. "I've played with a bunch of 19- and 20-year-olds. But it makes me feel old that he's playing."

Dru Love won't officially be in the U.S. Open field until the world ranking is published. The USGA held back six spots for anyone who moved into the top 60 in the world ranking after this week. Chris Wood of England finished right at No. 60, meaning the other five spots are distributed to alternates. The Georgia section, where Love was first alternate, was No. 5 on the list.

The son will have plenty of experience on the bag.

Love won the PGA Championship in 1997 at Winged Foot when Dru was only 3. He also is a two-time Ryder Cup captain who will be inducted into the World Golf Hall of Fame this fall. Love played his first U.S. Open at age 24 in 1988, and he was a runner-up in 1996 at Oakland Hills.

The 53-year-old Love has been slowed by a bad back this year and had no intention of trying to qualify for the U.S. Open until he caddied for his son at the first stage of U.S. Open qualifying and Dru made it to the sectional qualifier.

Love played in the Columbus, Ohio, qualifier and missed out by eight shots.

Erin Hills was busy for a late afternoon with strong wind. Playing ahead of Love group was two-time U.S. Open champion Ernie Els. Walking off the second tee, he looked back at the green and recognized a longtime colleague in shorts and carrying the bag.

Dru Love will be making his second start in a PGA Tour sanctioned event. He played in the 2015 RSM Classic at Sea Island, which his father hosts, and missed the cut.

Love hopes to impart some knowledge gleaned over three decades playing majors, mainly how to prepare and pick out lines off the tee and not to get to rattled when something goes wrong, which it often does for everyone at a U.S. Open at some point.

Beneath the instruction was no small amount of proud. Dru Love is the third generation to play in the U.S. Open. Davis Love Jr., a noted teaching pro, played in the U.S. Open six times. Love's entire family is coming to Erin Hills to watch.

The first order of business? Love has set up an appointment with sports psychologist Bob Rotella on Monday.