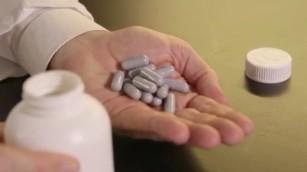 (CNN)Over the years, resveratrol, an antioxidant found in grapes, chocolate and red wine, has been touted as a possible antidote to Alzheimer's disease, cancer, diabetes and many other conditions. Now, the first study in people with Alzheimer's suggests that the compound, when taken in concentrated doses, may actually have benefit in slowing progression of this disease.

Researchers at 21 medical centers across the United States looked at the safety and effectiveness of taking high doses of resveratrol in an experimental pill -- equal to the amount found in 1,000 bottles of red wine -- in people with mild to moderate Alzheimer's.

The researchers looked at several biomarkers of Alzheimer's, and found that people who took up to four pills a day for a year had higher levels of amyloid-beta proteins in their spinal fluid than those who took a placebo (control) pill.

Although accumulation of amyloid-beta in the brain is a hallmark of Alzheimer's disease, patients actually have lower levels of this protein outside of the brain. The study finding suggests that resveratrol could help change the balance from amyloid-beta buildup in the brain to circulating protein in the body.

Even if concentrated forms of resveratrol pills like the kind used in this study were available, it's too soon to recommend going out and getting some just yet.

"The study is encouraging enough that we should certainly go ahead and do a [larger] clinical trial because we showed that it is safe and does have significant effects on Alzheimer's biomarkers," said Dr. R. Scott Turner, professor of neurology at Georgetown University Medical Center and lead investigator of the study, which was published on Friday in the journal Neurology.

The main goal of the current study, which included 119 patients, was to find out whether high doses of resveratrol could be safe. The only small concern they found was that patients taking resveratrol lost about two pounds during the one-year study, and weight loss is already a problem with Alzheimer's, Turner said. In comparison, the control group gained about 1 pound.

Much more research is needed

The study was not big enough to answer some important questions, such as whether patients taking resveratrol actually had lower levels of amyloid-beta plaques in their brain, and most importantly, whether they experienced less decline in their mental faculties.

A large, phase 3 clinical trial getting at these issues could start in as soon as a year, Turner said. (The current study was a phase 2 trial, typically meant to evaluate safety and get an early look at efficacy of a new drug.)

"To really get a better feel of how effective this could be you really need to do larger studies for longer periods of time (such as several years)," said James A. Hendrix, director of global science initiatives at the Alzheimer's Association, a research and advocacy organization. "Other potential therapies we've had had some early exciting results and then they didn't pan out in later trials," he added.

If resveratrol does pan out in further research, it may add to the medications that are currently available, such as Aricept and Exelon, which slow, but do not halt, progression of the disease, Hendrix said.

Ultimately, it will probably be a combination of several drugs, as well as diet, exercise and social and mental stimulation that help stave off the rapid mental decline that is often associated with Alzheimer's, he added.

Antioxidant may be most effective in combination

This is one of the first studies to look not only at these biomarkers, but also the metabolites of resveratrol in spinal fluid, to show that resveratrol is probably getting into the brain, said Dr. Giulio M. Pasinetti, who is the Saunders Family Chair and professor in neurology at the Icahn School of Medicine at Mount Sinai. However, he added that changes in biomarkers may not necessarily lead to mental and behavioral improvements, which larger studies will address.

In addition, resveratrol on its own might not end up working as well as a combination of resveratrol and other polyphenol compounds found in red wine, grape juice and grape seed extract, which could help people at risk of Alzheimer's and those who already have mild symptoms, Pasinetti said.

The current study used high doses of resveratrol to increase the chances that enough of the compound got into the brain to have an effect. But for now, the best way to get resveratrol is probably through diet. One glass of red wine a day could help those with mild Alzheimer's, "but no more than that," Turner said.

There is probably little benefit in taking currently available resveratrol supplements, even if they claim to contain levels similar to the ones used in this study. "The things that are on the market are not regulated, and you don't know how much is in them," Turner said. "There could be 500 milligrams, which is what they advertise [researchers gave participants in the study four 500 milligram pills a day] or there could be zero," he said.

Previous research has suggested that people who consume diets rich in resveratrol do not have lower rates of cancer, heart disease and other conditions.