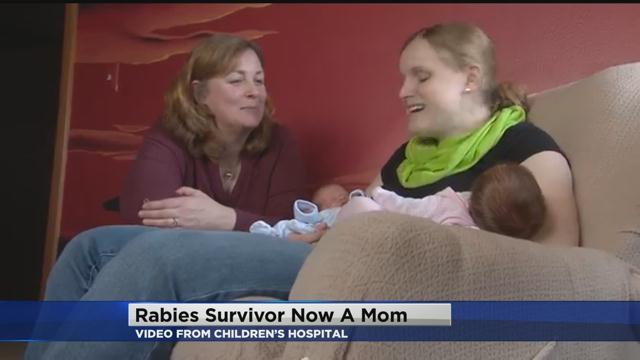 There is new video at five of Jeanna Giese-Frassetto and her new baby twins.

Several weeks ago, we reported that the Giese-Frasseto, who survived a near fatal case of rabies after a 2004 bat attack in Fond du Lac had given birth.

Now Children's Hospital has released a video in which she talks about becoming a mom and the perspective it has given her.

The video shows Jeanna and her babies, Carly and Connor.

Everyone is healthy now, but Connor had to spend a week in the Neonatal Intensive Care unit after he was born.

Watching Connor's struggle gave Jeanna new insight into what her parents went through when she spent 6 days in a medically induced coma as part of her then-experimental rabies treatment.

"With Connor having to be in the NICU for about a week and you know going up and down and not quite knowing exactly when he was gonna come home, I definitely see now from a mother's point of view what she went through,” said Jeanna.

"It was hard for Jeana to see him hooked up to everything.  I said to her now you know what we went through...you know, it's your child."

Jeanna Giese-Frassetto is still the first person ever to survive rabies without a vaccine.

Her treatment is now called the "Milwaukee Protocol" and it's been used to save other rabies victims.