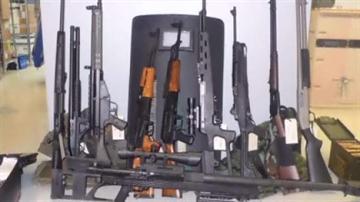 FOND DU LAC-Police released photos of weapons and ammunition seized inside the home of an arson suspect.

The man was identified as a possible suspect in an arson fire Monday at 65 North Hickory Street.

Officers who went to the man's residence at  871 S. Main, says the suspect fired at them.

\"In the early stages of this incident, at least 3 homes were struck by gunfire and at least 26 rounds were fired, including 2 from the .50 caliber rifle. Additionally, our investigation has concluded that at least one City of Fond Du Lac Police Officer was intentionally shot at as he approached the suspect’s residence.\"

The chief is praising a coordinated efforts with several different law enforcement agencies to secure the neighborhood and the surrender of the suspect.