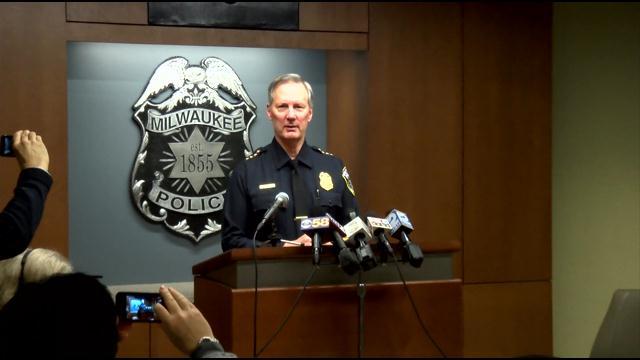 Less than 24 hours after a three-person panel upheld his firing of Christopher Manney, Milwaukee police chief Ed Flynn stood firm in his decision.

\"If we are going to be believed when we support the actions of officers when they're right, it's essential that we demonstrate the capability of holding ourselves accountable when those decisions are wrong,\" Flynn said during a press conference held Tuesday afternoon in the Police Administration Building.

Flynn testified twice during the five-day appeal hearing where Manney, who shot and killed Dontre Hamilton in Red Arrow Park after an out-of-policy pat down and struggle, was trying to get his job back. Manney's attorney told the panel Monday night Flynn's decision will leave his officers questioning his leadership.

\"What's the message this is going to send,\" attorney Jon Cermele asked the Police and Fire Commission shortly before the panel went into closed-door deliberation. \"Back off, wait, don't go in there even if you know you can handle this situation.\"

\"It's not a happy situation,\" Mayor Tom Barrett said Tuesday morning at City Hall. \"This is not a day of celebration.\"

Mayor Barrett says he supported Chief Flynn's decision to fire Manney back in October and still supports it.

Barrett says this case led to important changes in the way Milwaukee police conduct training. By 2017, all officers will be required to get critical incident training (or CIT). But Flynn says that can't be the only change to come from this process.

\"Crisis Intervention training is a useful tool and we'll be one of only two departments in the country undertaking to train all their members,\" Flynn said. \"But crisis intervention training for police is not a substitute for a mental health system.\"

The Milwaukee Police Association called the firing \"a travesty.\" President Mike Crivello believes it was politically motivated and that Mayor Barrett wanted Flynn to help make the controversy go away.