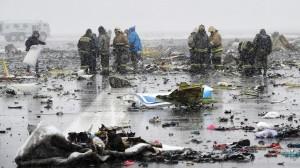 (CNN)After circling a southern Russian airport for more than two hours because of high ground-level winds and poor visibility, a passenger jet from the United Arab Emirates crashed during a landing attempt, killing all 62 people aboard.

The flydubai Boeing 737 took off from Dubai and was scheduled to land at the Rostov-on-Don airport at 1:20 a.m. Saturday (6:20 p.m. ET Friday), Russian Emergencies Minister Vladimir Puchkov said.

Authorities have ruled out terrorism as a cause of the crash. Instead, according to investigative committee spokeswoman Oksana Kovrizhnaya, they will be looking at three possibilities: technical issues, severe weather and human error.

Kovrizhnaya said the investigations will take at least two months, as required by Russian law, but "could be prolonged," according to state-run Sputnik news.

The plane's pilot had circled the airport hoping the weather would clear, Russia's emergency minister said. After more than two hours, the pilot attempted to land.

Instead, the aircraft's tail clipped the ground as it approached Rostov-on-Don's airport, killing all 55 passengers and seven crew members.

The victims' remains have been recovered and sent for forensic analysis, he said.

The airport will be closed until Sunday, state-owned news channel Russia-24 quoted officials as saying. Until then, flights are being redirected 141 miles south to the city of Krasnodar.

Hundreds of personnel -- from investigators to medics to psychologists on standby to assist grieving family members -- quickly converged on the crash site, and more help is on the way.

And the U.S. National Transportation Safety Board will send a team as well, accompanied by technical advisers from the Federal Aviation Administration and Boeing.

Boeing said in a statement it will serve as technical adviser to the investigating authority in charge, the Russian Interstate Aviation Committee.

Workers at the crash scene already had both of the plane's flight data recorders and one of two voice recorders by midday Saturday, state-run Ria Novosti reported.

Flydubai insisted its primary concern was for the relatives of the victims.

"We don't yet know all the details of the accident but we are working closely with the authorities to establish the cause. We are making every effort to care for those affected and will provide assistance to the loved ones of those on board," flydubai CEO Ghaith Al Ghaith said.

Families of passengers killed will receive 1 million rubles (about $15,000) from the government, Russian state media reported. It said Sunday has been declared a day of mourning in the Rostov administrative region, which borders the Sea of Azov and eastern Ukraine.

"This terrible tragedy grieves us all," tweeted Maktoum, who is also the UAE vice president. "We mourn those lost, may their souls rest in peace."

Ghaith, the flydubai CEO, said that, "as far as I can tell, there was no distress call," Ghaith said.

He added that the aircraft passed a "C-Check" on January 21.

Ghaith, the flydubai CEO, said that, "as far as I can tell, there was no distress call," Ghaith said.

He added that the aircraft passed a "C-Check" on January 21.

According to the Federal Aviation Administration, the aircraft maintenance inspections are graded from the least detailed and most frequent "A-Check," to the most comprehensive "D-check," which might occur only three to six times in a plane's service life.

Answering a question regarding the difficulty of landing, Ghaith said "as far as we know, the airport was open and we were good to operate."

"The poor visibility is probably the biggest clue," Schiavo said. "But this runway was lighted, it had good lighting at one end and passable lighting at the other and it did have an instrument landing system."

"With the clue of bad weather and making at least three different circles trying to reorient to this runway, it does look like pilot disorientation."

"It's not likely it was a mechanical failure," Soucie said. "It's most likely a weather-related incident."