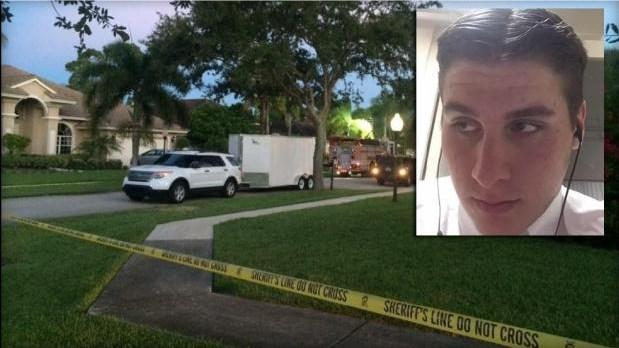 (CBSNEWS) TEQUESTA, Fla. - A 19-year-old Florida State University student charged with fatally stabbing a couple outside their home and then biting the dead man’s face remained under surveillance early Wednesday with guards nearby at a West Palm Beach hospital.

Martin County Sheriff William Snyder said Austin Harrouff was incoherent and making “animal-like noises” when he was taken to St. Mary’s Medical Center after the Monday night attack in a quiet neighborhood north of Jupiter.

On Tuesday, Snyder told reporters that Harrouff’s condition was “life-threatening.” West Palm Beach television station WPTV reported Wednesday that Harrouff is sedated and on a ventilator with guards stationed nearby.

Snyder said Harrouff stormed out of a restaurant where he was having dinner with his family on Monday night, apparently agitated over slow service.

A short time later, Michelle Mishcon, 53, and John Stevens III, 59, were attacked outside their home. Neighbors said they had a habit of sitting in their garage, where they often kept the door open while they watched television.

Neighbor Jeff Fisher, 47, tried to help but was stabbed during the attack. He was breathing heavily on the 911 call, which was released Tuesday. He told the operator that the assailant had attacked a woman and then him when he tried to intervene. Fisher was bleeding profusely and taken to a hospital.

When a deputy arrived at the couples’ home, she used her Taser on Harrouff, but it didn’t faze him, Snyder said. She tried pulling him off Stevens’ body, but couldn’t. Other deputies arrived shortly along with a dog and it took all of them to subdue Harrouff. Snyder said they didn’t shoot, fearing their bullets would strike the victim.

According to CBS Tampa affiliate WPEC, the sheriff said Harouff was “somebody not feeling pain, not responding to a dog bite, repeated stuns from a Taser, taking three to four deputies and officer dog to get him off. That’s somebody with a lot more strength than you would normally encounter.”

Snyder said hospital blood tests showed no signs of methamphetamine, cocaine, heroin or other common drugs; it will take longer to test for less common hallucinogenic drugs such as flakka or bath salts.

Dr. Wade Harrouff, a dentist, declined to comment about his son’s arrest.

Attorney Michelle Suskauer told WPTV she’ll be representing Austin Harrouff if he survives. She told the television station that his parents have not been able to see him, but she’s continuing to request permission for them to be by his side.

She said he is in serious condition in the hospital’s intensive care unit.

“Obviously we don’t know what predicated these acts. But certainly, there are mental health issues that are going to have to be investigated here. We don’t know if anything is going to show up on toxicology or not,” Suskauer said.

The sheriff said the circumstances of the case point to a designer drug that’s been terrorizing the state in recent years.

“When we see a case like this, when someone is biting off pieces of somebody’s face, could it be flakka, the answer is it absolutely could be flakka case, we don’t know,” Martin County Sheriff William Snyder said, according to CBS Miami.

Flakka is a designer drug that can be snorted, smoked, injected or swallowed, and has been seen in a large number of cases of bizarre and uncontrollable behavior in Florida in the past year.

Flakka is most typically made from the chemical alpha-PVP, which is a synthetic version of the amphetamine-like stimulant cathinone. Cathinones are chemicals derived from the khat plant grown in the Middle East and Somalia, where the leaves are frequently chewed for a euphoric buzz.

It’s the same class of chemical that’s used to make so-called bath salts, a drug that was found to be behind a number of alarming incidents, including the case of a man in Miami who allegedly chewed another man’s face while high on bath salts in 2012.

The immediate and long-term effects of cathinones can rival some of the strongest crystal meth and cocaine.

Sheriff Snyder said of the Martin County case: “It will be some time before we get any kind of toxicology report, but I would not be surprised, though, if we end up finding out that is the case.”